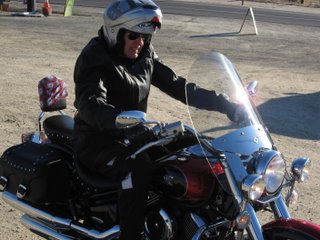 A rider I met through the Beginnerbikers.org forum, named Stoorat (Stu) and myself hooked up Saturday for a ride into N. San Diego County to Warner Springs and survived the COLD weather for a great first ride. Stoorat (Stu), a band/music teacher in Riverside on a Honda 4 cylinder 750, headed down from Moreno Valley and I from Placentia and we met up at Hwy 79 in Temecula. On the way down, the ride on the 15 freeway for about 48 miles, was very cold with me wearing my new Honcho leather jacket w/liner, and new Tourmaster insulated gloves plus Tourmaster over-pants thought that should be warm enough. Mostly it was but the hands and fingers were getting really cold. This was my first experience riding in really cold weather on a motorcycle and it was cold! I now understand the benefit of electric gloves. The fingers started to get numb and I started counting the miles to the turn off which came up before too long.
Stu and I met up and took a few minutes to get warm at a Carl's and get acquainted and then head out for about a 37 mile ride to Warner Springs. Great counryside and nice road with little traffic made for a pleasant trip. We did see some snow on the ground and for you folks in the north that should give you a chuckle. Since the speed was lower it did not seem quite as cold but as we started up to 4,000 feet it got colder. Stopped in Warner Springs at the golf club coffee shop. If you go there don't expect great food, just basic food at a little higher price than it normally would be, but then there isn't anything else around, but they did have hot tea.Decided it was just too cold to continue on and headed back the way we came. On the way I pulled over to let traffic by and found I was holding up traffic a bit as several cars zipped by me, oh well. Stopped at Aguanga Junction, only stop sign until Temecula and took a few pictures as evidence of a great trip that was a result of hooking up here on BBO. These are the only pictures due to too much fun on the road, and too cold to think about it earlier. Total miles: 196, and 7 hours total time. Took me a long time to defrost!
Stu: (first picture)
Richard with all the gear: 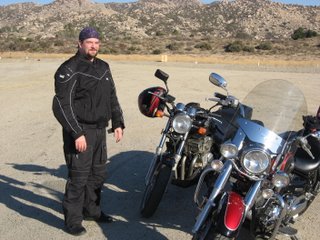 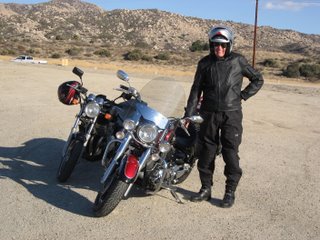 We just came from that direction. 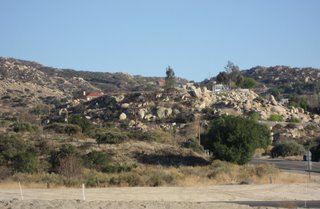