We left Polly's Pies on Imperial Blvd and headed for the 91 Fwy at 8:25 am Thursday. Destination: Palm Desert via roue 74 the Palms to Pines Hiway. Went out the 91 to Van Buren in Riverside and cut over to the 215, past the National Cemetary near March AFB. No time for pictures along the way. Exit the 215 at 74 and head into Hemet. Lots of new home developments out that way, need a new home or investment property? Watch for foreclosures coming soon.
SOME OF THE PICTURES DON'T MATCH UP TO THE COPY, SORRY. 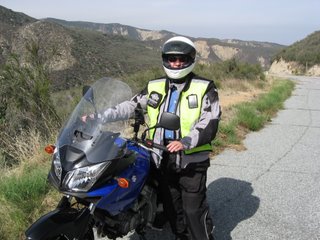 Stop for gas and then off into the high country. Road gets fairly twisty as you get higher and
higher over 4,000 foot level. My picture is below on the road up to mountain center and the picture left is jim a friend from Azusa . It becomes challenging for me as we head up to route 243 which would take you on up to Idylwild, took the curves at about 40 mph which is not fast but we had no traffic behind us which really helped make it pleasant and I could concentrate on the curves. We stop at the intersection in a paved area with lots of gravel left over from snow season. Take a few minutes break and were about to take off when all of a sudden Jim's bike is leaning over on me and my motorcycle. Seems he forgot the sidestand wasn't down. Luckily my leg and the foot rest help cushion the fall. We get the bike upright and head off. He is now the 3rd person I have ridden with that has dropped the bike in a parking lot, is this some sort of tradition? I did not realize until later that Jim had punched a hole in his windshield when it fell over due to hitting a GPS gadget on his handlebar, see picture below. 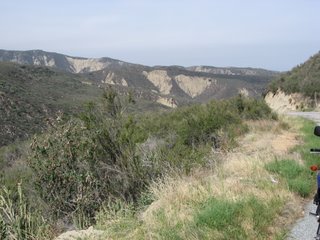 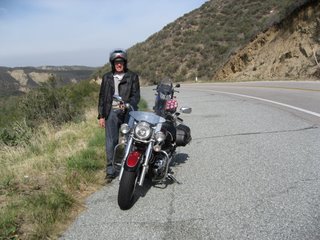 These are Google Earth images of the road heading up the hill to summit, I almost can't believe I did that. It went quite well actually and handled the curves nicely, not fast but leaned over pretty good. 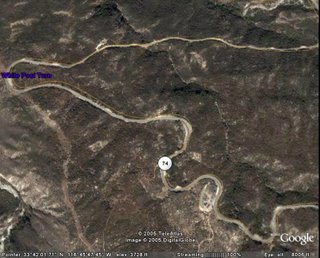 The sides of my tires got more wear today than the past year. 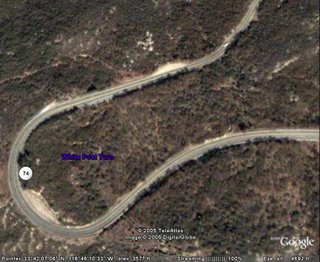 <
After leaving the 243 junction we head out through a long stretch of flat valley area getting ready to head back down to the desert level and Palm Desert.
We just came around that corner: And looked down and saw this: 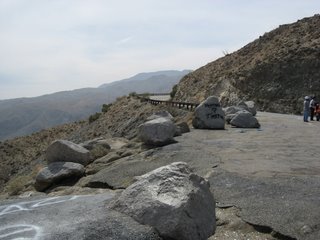 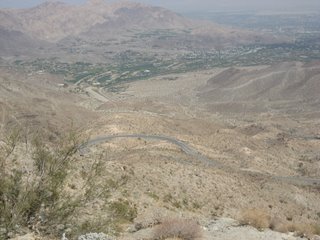 Here we are at the Vista point looking down a couple thousand feet into the Coachella Valley and on over to he other side where the 10 Fwy is. Great view, but below us is the "Road" and there are 3 big switchbacks, looks scary to me especially on only 2 wheels.

There's the broken windshield as we get off to go to lunch at Elephant Bar in P.D. Arrive about 11:40. Other pic is looking out toward the 10 Fwy way off in the distance but very hazy so not much to see. 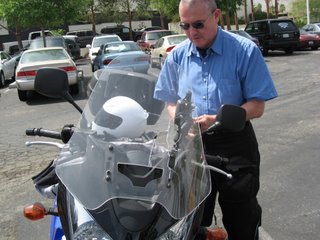 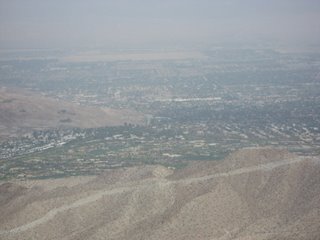 This is a group of riders that passed us and then we caught up with them, A BMW & several Goldwings. They are from Palm Desert. Other image is Google Earth shot of the switchbacks going down the mountain. 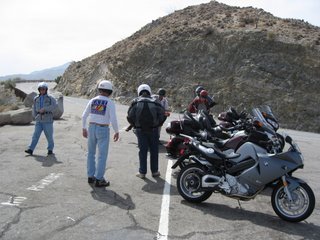 After lunch we went up to the Tram and I nearly dropped the bike on a turn in the uphill parking lot but hit a trash can instead, no damage, then headed back on the 10 Fwy, and I cut off to the 60 and had more curves but after the mountains and switchbacks they were no problem. Total trip 235 miles, left 8:30 returned by about 3:45 after stopping in Riverside to see a friend. Boy was I tired!
Posted by Richard at 6:26 PM