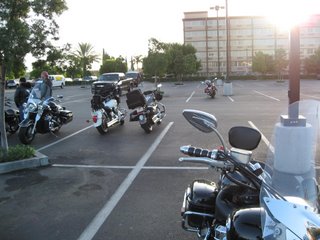 My big trip w/Star Riders group. Early morning 7:30 am, and the group is starting to arrive. 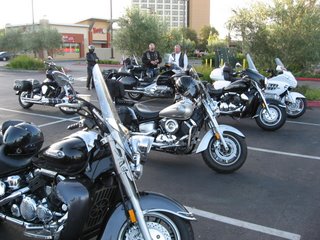 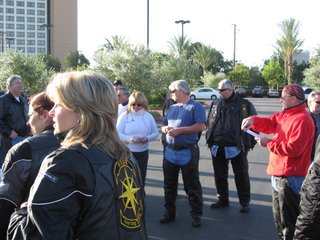 My first ride with the Orange chapter of Star Riders and a big one at that. 35 riders in all gathered in City of Orange parking lot at 7:30 and after filling out paperwork going over the rules and hand signals we started to form up into 4 groups of 8-10 riders each. Lots of Road Stars, Liners, a few Harleys including a sportster maybe 3 Goldwings and a few big touring Yamahas and a couple 650 V-Stars, no Kawasaki 900's or Nomads. Orientation and rules meeting. Very well planned out and very professional with safety in mind. That's Jerry the chapter president in the red jacket. 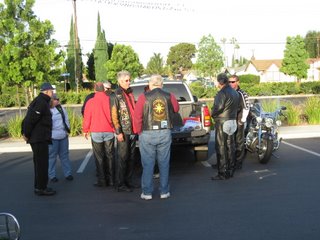 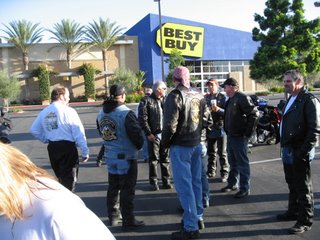 Destination: Tehachapi up in Kern county, total round trip expected to be near 300 miles and we were going to take to the hills! 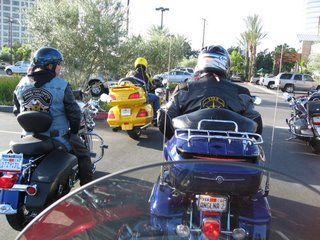 Starting to form up in groups of 8-10. Our group #2 has eight members 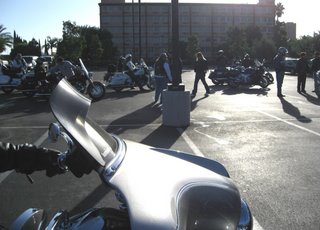 And did we ever, Angeles Crest Highway, Highway 2 to the 14 Freeway, and Little Tujunga roadon the way back on the menu. 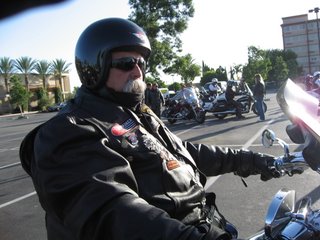 Since I was new was appointed a "shepherd" to keep an eye on me and see how I did. That's Joe, on his Roadliner that's really fixed up like a Stratoliner. We left at 8:10 am and headed up the 57 to the 210 on to Angeles Crest Hwy. I found out quickly that the hand signal talk must have gone over my head because as soon as we got on the 57 Freeeway and they started giving hand signals it took me a few seconds to figure out what it really meant. Learned what back fill and front fill on the freeway means, and how those hand signals work and what they mean. Stopped to gas up and off into the hills we went. 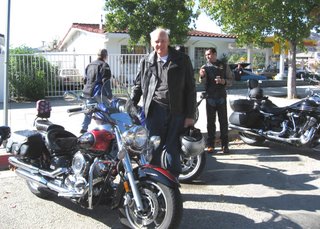 At the first gas stop where the Angeles Crest Hwy starts, ready to head into the hills, with no clue what's ahead-ignorance is bliss. I need better gear after seeing this picture, but as president of Wrinkle Riders I am living up to the image. 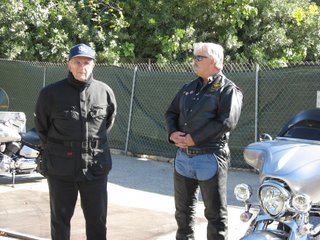 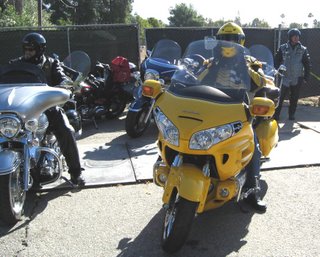 
Left the gas station and on to the Angeles Crest Highway, famous for it's twists and turns here in SoCal. Yipes, I was falling back right away as I just was not ready for that road. After a few miles and many turns, started to warm up and get a better handle on the whole thing and began to catch up. Hate to hold up my group so there is some pressure to get going. made it through the hills, and those are some hills, both up and down mountain road with lots of curves, finally out to the 14 Fwy headed toward Lancaster and then Tehachapi. Next stop Tehachapi, -long ride. 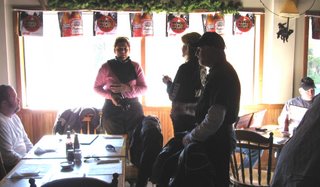 Arrived 11:45 and got gas and pulled into the parking lot at a Cattlemen's restaurant that was closed just for our private party-Nice! 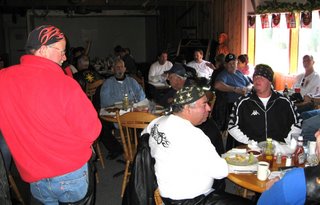 It was cold and I was getting a bit hypothermic, I need a better leather jacket and cold management gear. Spent $300 on the First Gear leather jacket and not happy with the fit although it is thick and heavy. New top priority to get that solved before next big ride. Doubt I will get electric gear, but more layered clothing to contain warmth. At 50-70 mph the cold does get through and I am in total denial when it comes to cold. 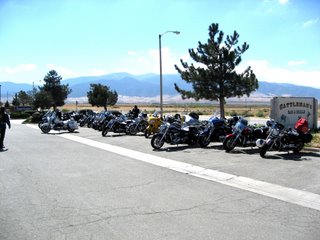 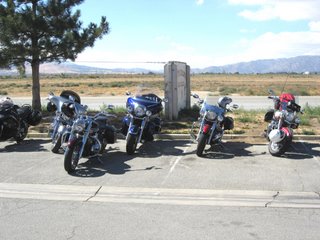 I asked where the truck and shuttle bus was to take the motorcycles and us back to Orange where we started, but apparently I had some wrong information.

Going back we took a different route over Sand Canyon road to Soledad Highway for gas break, and then into the Little Tujunga pass. Heading back through Sand Canyon and then Little Tujunga Road back to the 210 instead of going through Angeles Crest, was even more twisting and curvy both up and down hill than ACH was. This was way harder with many more and tighter curves on the way back for sure. Learned what the word lean really means in going into a few curves. I was getting pretty good at keeping up and the pace was steady and conservative.
Lots of credit to the leader on a Yellow Goldwing for taking us all through it with no spills. The long freeway ride back to Orange was good with a few slow traffic spots and a mattress in the road near Imperial on the 57. Did not stop until reaching the Block at Orange at about 5:40.

Learned that one rider did go down and it was not me. Dave a rider from Los Angeles, that I spoke to during morning set up, had this beautiful shiny all white Yamaha Royal Star Tour Deluxe with radio and speakers to listen while on the road. We talked about how and where he bought it. Turns out he did not make it through the canyons. He hit his brake(s) in a turn and Hi-sided. Had some injuries including possible concussion and moderate damage to the RSTD but survived reasonably well all things considered. He did have three cracked ribs, broken collar bone and a punctured lung, although his stay in hospital was just a few days at most, I found out later. I don't recall if he was wearing a substantial jacket but it did match the all white Yamaha. I did not see any of this as he was in another group.
The RSTD is not drivable from what I heard at the end of the trip, and he had to have transportation to the hospital. 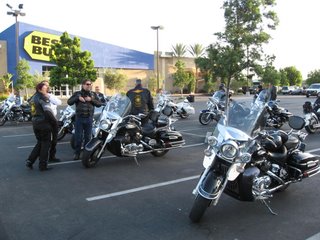 In the center background is Dave's all white Royal Star Tour deluxe.

Arrived back in Orange and headed home. I was tired, but after a couple transfusions, electro-shock resuscitation and oxygen was back to normal by the next morning. Total miles 285.
__________________
Richard
Posted by Richard at 7:01 PM

Great pics and great write-up, Richard, even though that handsome devil with the CB750 is conspicuously absent in all of those shots...

Sure sorry to hear somebody had an unplanned get-off. That's always a real bummer, takes some of the joy out of an otherwise great ride. :(