Yep, I bought it-it's mine!

Today Friday October 26, I met with the owners in Lake Forest, handed them a check and they handed me the keys and bill-of-sale and Off I rode. 2006 Yamaha Road Star 1670 cc, Silverado, pearl white with gold pinstripe and saddle bags, passing lamps up front and passenger foot rests-something different, oh yes and only 1815 miles and all stock. A little tentative leaving the driveway and heading for some speed bumps, and tight turns in their complex. I was getting to know the controls and didn't want to stall it and did not want to drop it. It was getting dark and I had been very hesitant to be riding a new to me motorcycle with lots more power and darkness was on the way, left at about 6 pm.

First impressions and contrast with my current V-Star 1100, the engine is definitely bigger and a bit shakier as well. There is more vibration felt in the seat even when underway than on the 1100. Belt drive, so the take-offs are smoother than the shaft drive of the 1100, it's a noticeable improvement. Handling is very similar to the 1100 as the new one only has two wheels like the old one. I began to feel very comfortable with the ergonomics and where everything was relative to the 1100, such as foot pedals, handlebars and foot rests. Feels like I have more room all around with slightly more leg room. While it weighs about 80 more pounds than the V-Star it really should not be too noticeable, except maybe when I pull into a gas station or tight parking lot. There have been a few times where I had to really hold on and plant my feet to keep it upright and hope this one will be no worse.

The power upgrade is noticeable but not in a hard to control way. I never felt like it was getting away from me but it can really move if you crank the throttle. Fourth gear feels a lot like fifth gear on the 1100 when going 50 mph or so.
I already moved the Tourmaster sissybar bag over to the RS and it fits, so I don't need to upgrade the sissy bar as I thought.

Enough chatter, here's a few nighttime photos in the garage. 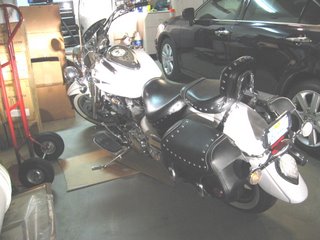 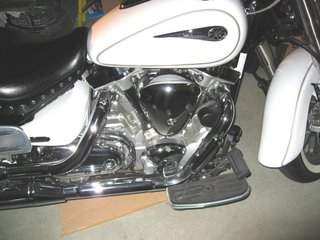 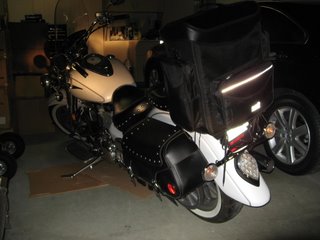 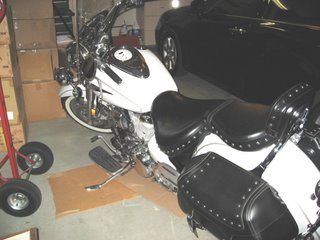 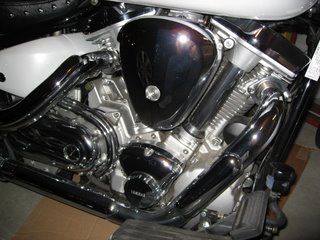 Kinda dark in the garage, more when it's sunny.
Posted by Richard at 8:41 PM