Final report on damage and repair to the Road Star

As most everyone by now knows, I had a slip and fall on the way back from Monterey as we turned onto the 101 Fwy. Luckily it was at very low to almost no speed so damage was minimal. No paint damaged, and minor scratching on bottom muffler (mark of experience). Total tally on repairs and parts: Repaired passing lamps, only needed a couple new bolts/washers and they reattached the original lamps, small scratch on the chrome ring ($125 dealer).

The following parts were ordered for Do- It-Yourself Installation: Windshield-plastic only-DONE ($137); New chrome cover for the brake reservoir...DONE ($17)they sent me two of them; Engine guard waiting for installation ($137). Ordered from South Seattle Yamaha and was overall very impressed. Parts were discounted about 20-25% and ordered on Monday arrived 100% complete on Friday! Can't beat that.

Thumb took the biggest hit and it's back to about 80-85% operating capability.

LAST AND FINAL ITEM ON THE REPAIR AND UPGRADE

The engine guard is installed, and the final item: the upgrade to the Tall Sissy Bar is installed as well. Turns out all it took was removing 4 bolts and out popped the old one and in slid the new one. There is barely enough room to get at the bolts but a member on Road Star Riders gave me a detailed answer on how to do it. Took less than 45 minutes and everything was back to better than before.

NOW, back to the regular blog
Posted by Richard at 6:35 PM No comments:

July 3rd ride to Big Bear included Wayne from Chapter 230, Stu (Stoorat on BBO forum), and Jim (Nubiker, also on BBO), and me. A relatively short hop up to Big Bear and the Grizzly Manor cafe on Big Bear Blvd for a good hamburger. Stu was on his new-to-him, Honda 919, 4 cylinder sport bike, Wayne on his C90 Suzuki, Me on the Road Star and we met Jim up in Big Bear and he was riding the Kawasaki 900. Wayne and I met Stu just above the 91/215 Freeway and 60 Freeway interchange at about 9:30 am and off we went. When we stopped at the ranger station we let Stu go on ahead as we would not be able to keep up with him. Just a few pictures of the whole day. Coming back we rode under the smoke from a new Yucaipa fire that had started a couple hours before we got there. 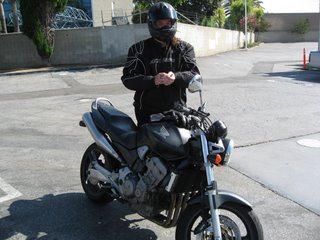 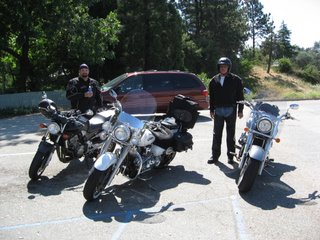 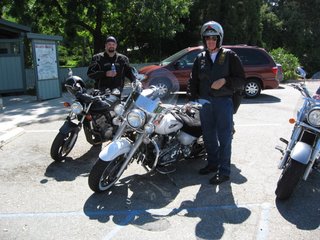 That's all there are, did not even get Jim's picture...oh well next time. 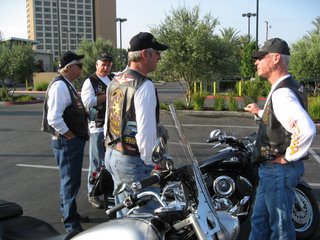 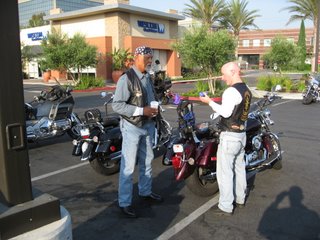 Chapter 230's scheduled trip to Julian Started out at about 8:00 am with a briefing and meeting and then off we went at around 8:40am heading up the 57 Fwy to the 91 and over to the 15 Freeway south to Temecula and Hwy 79. It was going to be warm to very hot so I brought enough water and Gatorade to attempt to keep hydrated and avoid any heat related problems. Took along a spray bottle and a frozen bottle of water to help cool thing down on the stops...well it all worked. 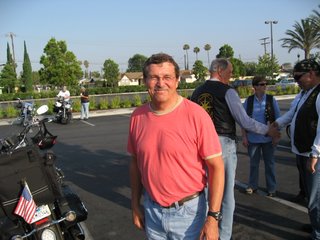 The President of Chapter 415, Bill was along for today's ride as well, he's in the photo above. 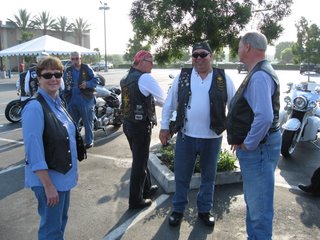 This is George on his first ride with 230. 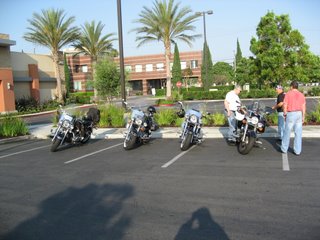 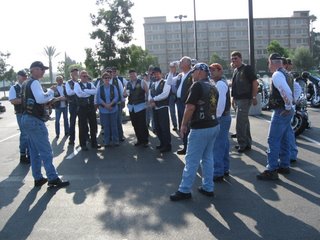 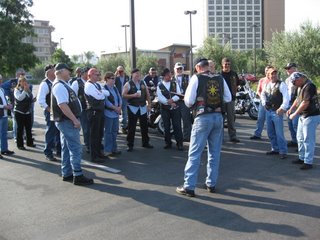 Looks like about 28 riders getting ready to head out.


HERE IS THE ROUTE TO JULIAN, I like to see it all mapped out. It would be nice if I could map it out before the trip as well.

Click to see a larger map or slide it around to see the whole trip.


View Larger MapYou might notice we went into the Anza Borrego Desert area and the road continues up to Julian and is Quite a road, lots of curves. Leaving the desert floor it's only 12 miles to Julian but we go up to over 4,000 feet. Temps were pushing 100 deg. before we started to climb.

Arrived at Julian and stopped for lunch. It was a quick stop with little time for sightseeing in the tiny town. 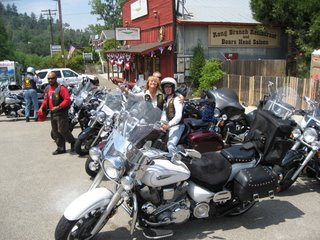 Lunched with Barry and Lynne and we discussed the fact that my left turns were slightly sloppy. I seem to be having a problem holding a line going left. Right Turns, no problem, but left would wander, and be a bit hesitant and weak. Barry wisely offered to hang back a bit on the left turns especially when we were in staggered formation. 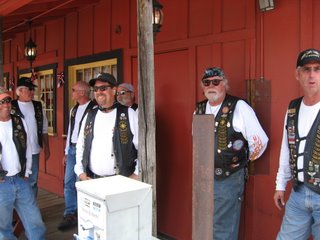 Waiting in the shade til it's time to go. We scared off some customers to the restaurant, and I was right in there somewhere. 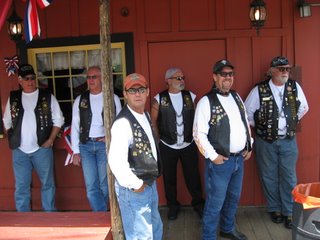 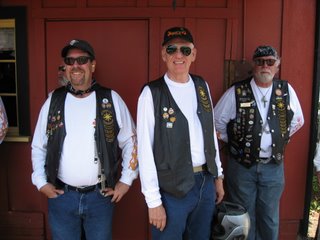 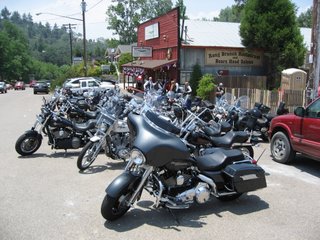 Returning to Orange we made a slight but wise course correction to avoid the Del Mar area on the 5 Freeway. Total miles around 275. All arrived safe.
Posted by Richard at 8:32 AM No comments:

Party at Bob and Ann's 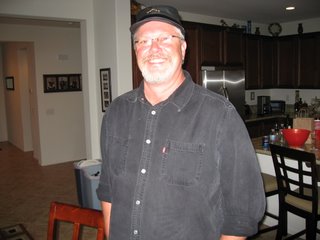 This is Ron from Tennessee visiting California. 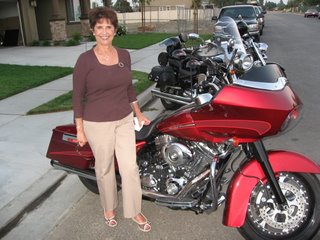 No we did not buy a Harley, but just had to have a picture of Glenn's new Road Glide and Jenny.
We (Mrs. Rider and I) attended a fun party at Bob & Ann's new home in Rialto To say hello to Ron & Jeanine Reeves who are Tennessee and Kentucky state directors with STAR. It was an opportunity to meet with the Reeves who are former Chapter 230 members that have moved on to bigger things in STAR.
As you can see everybody was eating all that tasty food.

The videos are short and I tried to link them together into one video but it just would not work, so you have to click each one to view.In this last video a quick look at making burgers!

Posted by Richard at 9:31 PM No comments: