Chapter 230's regular Thursday night Bike Night was moved to Portillo's Hot Dogs and sandwiches in Buena Park to meet with employees from Yamaha headquarters. Joe Dagley from Yamaha Dealer Development promised to bring some T-shirts so naturally everyone showed up. It was one of the best attended meeting in a while and we look forward to meeting with them on the 4th Thursday of every month at Portillos. There were a number of riders from Yamaha as well. I am hoping we can switch the meeting to Portillo's every Thursday, but will wait and see.

Instead of posting the pictures here I put all of them on a Picasa web album and each picture has a caption. Easier to do it this way and I'm still learning what works best so I hope this will be convenient. Any corrections needed can be made.
Click the PICTURE to go to the album...
Posted by Richard at 11:02 AM 1 comment:

The 4 second interval relates to keeping a minimum 2 second to 4 second space between the vehicle directly in front of you for safety and allowing enough reaction time to be able to move out of the way or stop as needed to avoid a crash or encounter. There was also mention about older riders and how reaction time can slow down along with eyesight and visual clarity. Taking all that into consideration, from now on I am leaving a 1 day interval between me and the traffic in front of me.
Posted by Richard at 12:59 PM No comments:

Sunday August 24, 2008 5:45am finally arrived. After taking the MSF safety course in November 2004 I am about to attend my first motorcycle riding class for experienced riders. Learning should never really stop and this is part of trying to maintain and improve my motorcycle riding skills. Three other members of Chapter 230 including Lynne, Barry and Johney all took the class the week before. Because of the effort of Lynn and reading her Blog it was a lot less stressful to get ready for this class.

I met up with John R., Tom from Chino, and myself and we rode over to a Denny's near the class. After breakfast we headed over to the Cerritos College parking lot and the "grinder". Other members of Star included, Don, Gregg, Tony (on a new Raider), along with John, Tom and myselfwere ready to go. There were other classmembers but I failed to get their names. 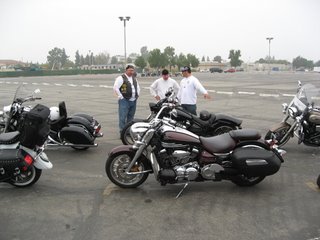 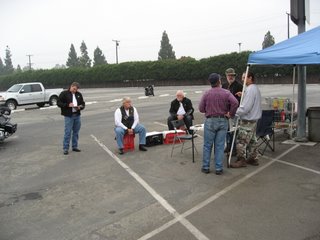 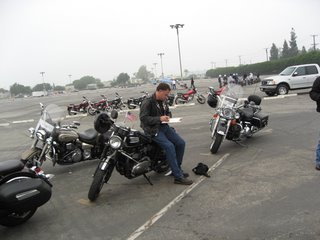 After registering and documentaion we had a safety briefing and run through of our first exercize. There were exercizes in weaving, turning, riding through a series of cones, stopping in a turn, stopping and weaving and going through a series of curved patterns. All very similalr to the first beginner class I took and with a lot of the same comments by the instructors as well. "Keep your head and eyes up, turn your head into the turn, look where you want to go and keep your speed up and even". 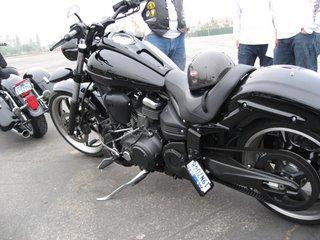 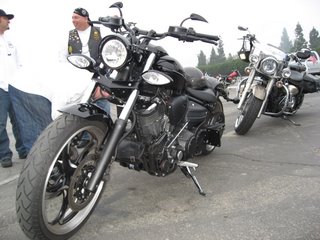 A new 1850cc Raider with lots of modifications. This is Tony's new Raider and he just loves it. He blacked out all the chrome so he wouldn't see his own reflection, why I don't know. 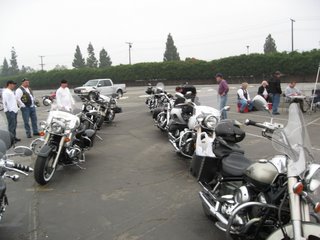 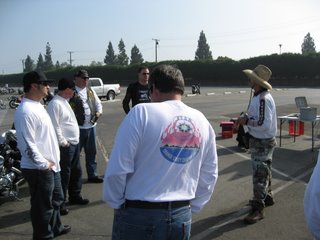 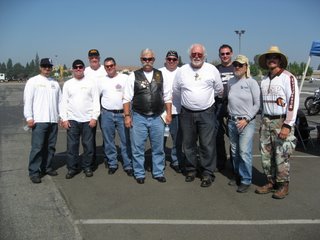 The group including the instructors Jim and Stephen on the right. (picture taken by Lynne Shapiro who graciously stopped by with cold water) 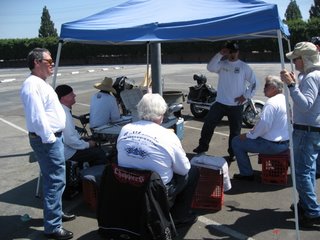 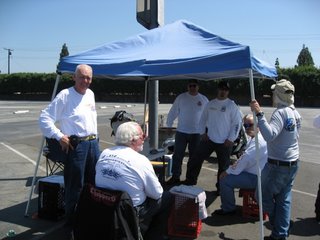 It's getting hot out here but it's nearly over. 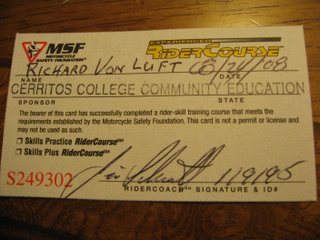 Part of the safety course is a no- riding and drinking segment using a pair of "Alcohol/drunk Goggles" Here's Tom and his attempt to walk while wearing them.
Posted by Richard at 4:48 PM No comments:

The trip up to Solvang included me, Ken and Wayne, both friends from STAR chapter 230. We started out after meeting up at Denny's off the 91 Fwy. I had mapped out the route as best I could and off we went with the idea of going up to Solvang along the coast and meet up with Chapter 415 from Harbor City.

View Larger Map
The map is a bit messed up as it does not show the route leaving Santa Barbara past Lake Cachuma, we went up 101 along the coast through Malibu and on to Oxnard as indicated on the map. Going through Malibu it became misty and very cool so we stopped and put on an extra jacket liner which really helped. I had planned a stop in Oxnard to refuel but when we got back on the 101 I could not find the stop and at the last minute took the Main St. exit where we really lucked out as a Mobil station was right there just across from the exit, it was like I actually knew what I was doing. In Santa Barbara we cut off of Hwy 101 and took Route 154 going past Lake Cachuma and on to Solvang. Wayne knew about a vista point to stop and take a look at the lake so we did. The nice thing about going in a small group is the ability to make changes in routes and stops as we go. 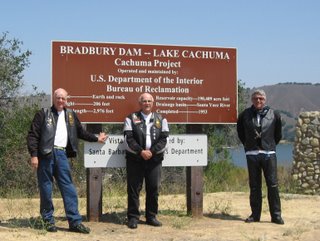 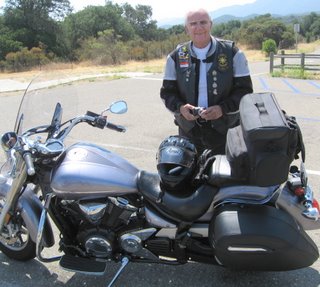 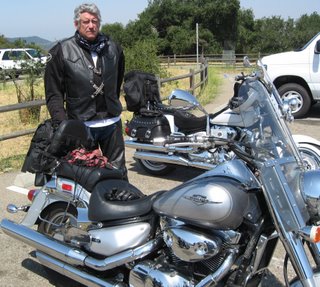 Here's Wayne to the left, and the Suzuki C90. 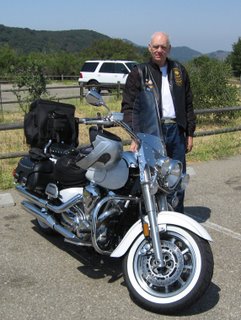 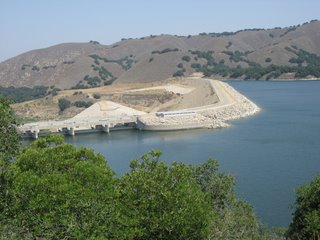 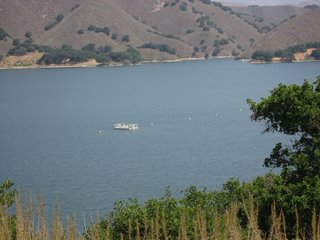 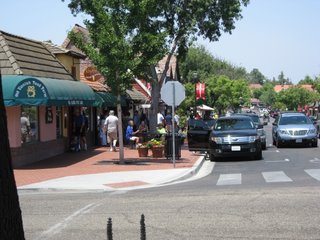 Back on the motorcycles and heading toward Solvang we passed a Cachuma Indian Casino on the way into town, it would have been interesting to stop. But we headed into town on the main street and came to the heart of the tourist trap, no that's the village, with lots of small stores, shops, bakeries and assorted gift stores. I believe the windmill is a symbol of their desire to suck as much money from the tourists as possible. Actually it's a very nice town and we really had a great time just sightseeing and taking in a 4 block area before heading to our next destination.. 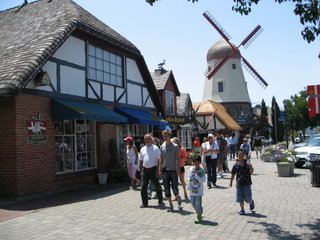 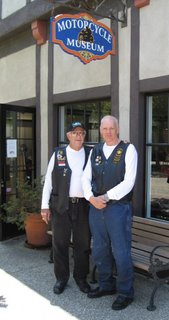 next stop the Motorcycle Museum in Solvang. We rode further into town and spotted a large group of motorcycles parked along the street and figured this must be it 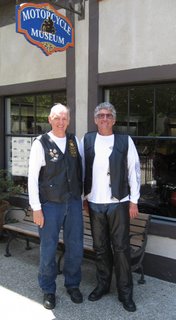 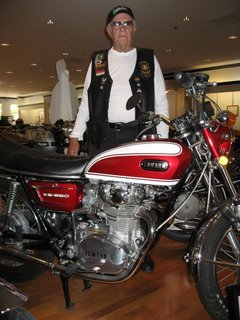 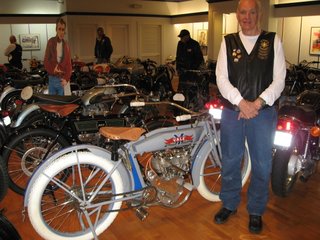 It's rather small and cost $10 to enter but Ken and I went in anyway. When we came out all the other motorcycles had left and we mounted up to head for Big Bopper Hamburgers on the road leading out of town toward Hwy 101 where Chapter 415 was expected to stop for lunch.

It was about here that I gave up on taking pictures for some reason. I think it was due to having too much fun on a very pleasant ride plus it was getting quite warm and my brain was getting fried, so the pictures end. We met up with Chapter 415 and Chapter president Bill along with about 12 riders that we have gotten to know. The hamburgers were not the reason for the trip but they were OK anyway.

Heading back we went toward Hwy 101 and 415 headed for rte. 154 and Lake Cachuma. The trip home was long but uneventful and not too hot until we headed inland from Oxnard instead of taking the coast route. Total 385 miles and a great day to add to the list of other fun trips.
Posted by Richard at 11:20 PM No comments: