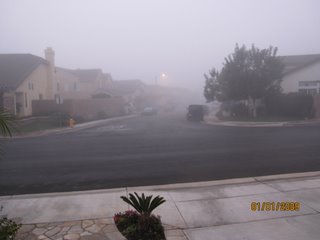 The first ride of the new year- 2009! and It was cold and foggy. A group of us from STAR 230 were invited by Stan, also a member of the chapter and the church group that organized the ride. 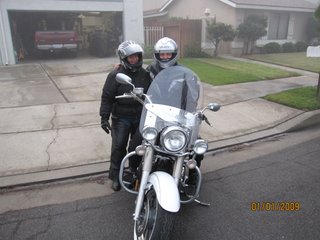 I met Lynne at Johney's home in Orange at 7:30 am, but discovered Johney could not make it due to flu conditions. 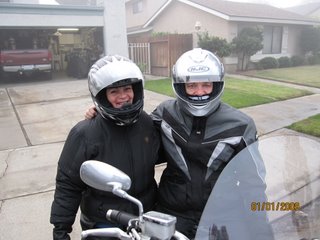 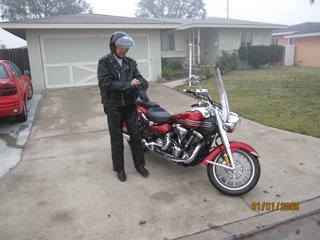 So off we rode to Stan's home in Garden grove. On arriving at Stan's we were getting ready to go and I noticed Stan putting on these thin summer type glove, and I told him you better get thicker gloves or you're going to freeze a few fingers. I have learned that when it get cold out, it gets REALLY cold when riding at 60-70 MPH. 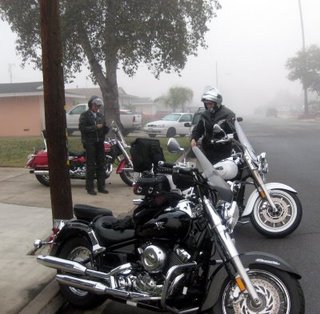 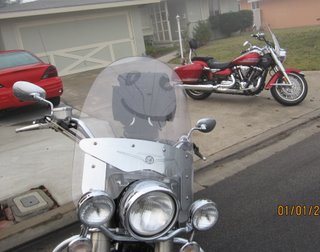 Lynne had a similar amount of cold weather gear as we learned what works best on a ride to Fallbrook and DeLuz canyon about a week or two ago, it was cold then as well. 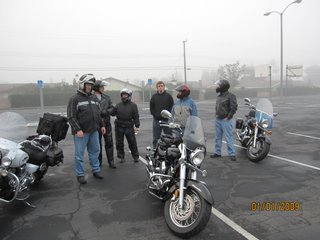 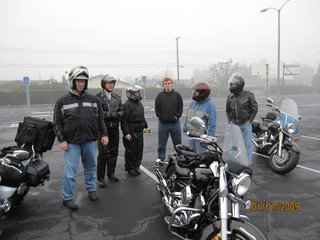 We arrived at the church in Garden Grove and met up with a number of riders from Stan's church group as they showed up. Just as we were getting ready to ride off, Joe from Ch. 230 rolled in and joined the group ride. There were 11 motorcycles and one chase vehicle with 3 people in it. 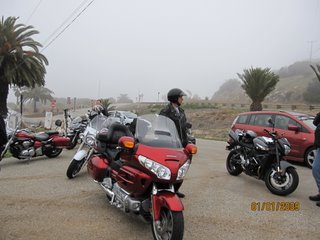 The leader was on a bright red 2008 Honda Goldwing with navigation and radio-quite a nice package. 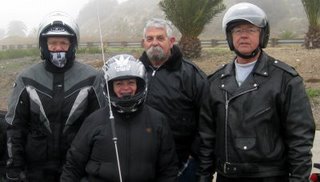 Here's the 230 group, me on the left with my neoprene face mask, Lynne, standing in a hole in the pavement, Joe and Stan. Joe cheats he has electric gear. 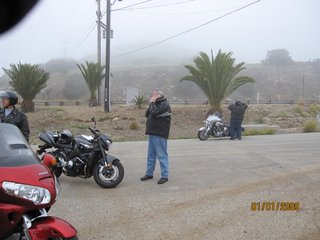 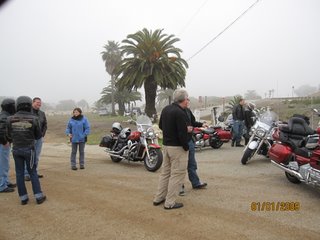 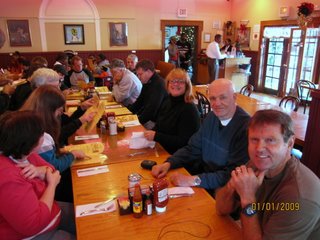 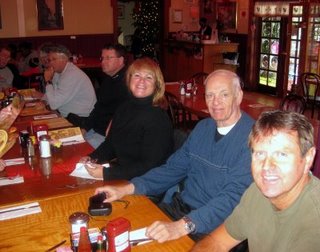 After a short stop in Palos Verdes along the coast even though we still could not see the ocean due to fog, we get ready to head back to Long Beach and a restaurant called Roscoes chicken and waffles, just off Ocean Blvd. in downtown Long Beach. I had never heard of it but both my kids know the place well. I had a chicken salad sandwich and potato salad...very good. Lynne had the waffle and chicken combo...very good she reports. Food was good but not inexpensive for some of the chicken combos. 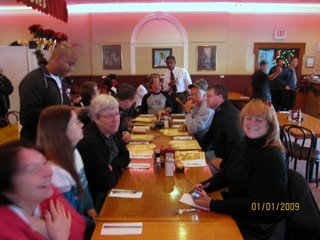 Wearing all that gear made a big difference in keeping me much warmer than on previous cold weather rides. Lynne, Joe and I rode on up to Fullerton and Cyclegear to check out New Year specials, but I didn't need anything. Lynne bought Barry a couple pair of gloves.
Posted by Richard at 6:17 PM