View Larger Map
PICTURES, YOU WANT PICTURES??? YOU WILL HAVE TO CLICK A LINK TO GO TO PICASA...YOU CAN SEE ALL OF THEM WITH NOTES ON MOST PICTURES. Something different for this edition.
when you reach the end of this article, click the picture to open the Picasa album for the slide show. Just click the slide show option....

DAY ONE: 6:00 am Thursday, it's chilly and dark out but I'm all packed up and ready to go. The Sissybar bag is loaded with clothes, there's lots of bottles of water and Cranergy drinks stuffed in the side pockets and some in the saddlebags, a pair of Nike sneakers, my STAR vest, and everything else I could think of. My riding gear for this trip include my mesh jacket with liner, the yellow and black rain/wind breaker and a sweater, plus the under armour type base layer under my jeans and knee/shin guards. Planning for cold to warm weather is difficult, but with the wind breaker, heavy winter gloves and liner I can stay fairly warm down into the 40 deg. range. My room-mate Ken and I meet up at Denny's for breakfast while the rest of the crew meets at Coco's. Coco's does not open til 6 am so they are not ready until after 6, where Denny's is open 24 hours and always ready. Who ever picks these, please take notes.

It's Kick-Stands-Up at 7 am but since their breakfast was slow we left a few minutes late. The cast of this crew includes Dan our Pres. Terry-VP, Scott, Don, Ken, Myself, a couple on an FJR-Michelle, Larry and Lela on that green and yellow shiny Harley, Keith, and off we go. Our route will take us through Yucca Valley to a tiny town called Amboy on the old route 66 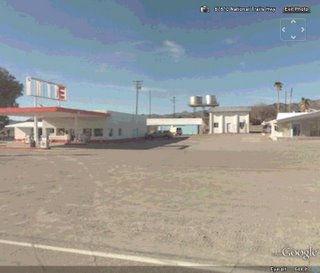 and then to I-40 for the rest of the trip to Kingman, AZ and the Days Inn motel where our lavishly appointed suites await. I can't really describe the towels, but lint on sandpaper would do the same job. Coming in to Kingman I realize that I had been here before on a trip with another couple in their van and we stopped at the Cracker-Barrel restaurant and that's right where we are heading for late lunch before checking in. There are no Cracker-Barrel's in California for some reason.
_ _ _ _ _ _ _ _ _ _ _ _ _ __ _ _ _ _ _ _ _ _ _ _ _ _ _ _ _ _ _ _ _ _
Let me explain my take on group riding as practised by STAR and Chapter 230. In a group ride everyone rides in a staggered formation with about a one second separation between you and the rider on your left or right and about 2-3 seconds separation with the rider directly in front. On this ride I thought I was observing that separation but on arriving at our first stop was told to back off a bit from the couple on the Harley off to the side of me. OK, no problem, then at the next stop I was told that I was staying too far back and to keep it tighter. What the heck was that about? Further on I then heard that I was not staying in my portion of the lane which generally is either the right or left 1/2 of the vehicle lane. I strongly disagreed with that assessment as I make a point of trying to observe lane integrity, but for some reason was getting these comments when I thought I had been doing reasonably well. There is more to this story but will leave it to another discussion. Suffice to say I later decide not to attend the STAR trip to Billings.
It occurred to me later on that some of the best rides I have been on were the ones with just 2 to maybe 5 riders where there was no hard and fast rules about lanes, separation, and making unscheduled stops along the way. Structured rides are designed to take a bigger group to it's destination safely but it's tiring to observe all the rules. It made me more aware that STAR rides are quite structured, and if you don't fit their pattern of riding can get you some static or helpful advice, but other riders back up my impression that I do reasonably to quite well in these group situations and have increased and improved my riding skills over the past year. It's my Blog so I figure I can rant any way I want to.
- - - - - - - - - - - - - - - - - - - - - - - - - - - - - - - - - - - - - - - - - -
Now back to the trip. Arrived at the hotel, checked in, Ken and I decided to go somewhere for dinner and wound up at Kentucky Colonel's for chicken. Friday morning we are leaving at 7 am to Laughlin for the STAR meeting and breakfast at the Aquarius Casino and Hotel (formerly the Flamingo).

FRIDAY: We start out and pick up additional STAR groups from other motels and suddenly we are in a group of maybe 70-80 motorcycles 2 abreast heading down the road. I was blown away with the spectacle and wished there could be video or pictures of this "rolling thunder" group on the road. It was thrilling and made the trip worth it right there. Breakfast was entertaining, I won a key chain but gave it to Dan for a drawing prize. This is where to meet up with old friends and new including Joe Dagley from Yamaha.

The parking lot of the Aquarius is filling up with motorcycles of all kinds and Ken and I decide to take in the sights and exhibitors. The Laughlin River Run is a BIG motorcycle event with thousands of motorcycles and riders, poker runs, contests, exhibitors, sellers of all kinds of merchandise and who knows what else. We are just observers basically. We eventually head back to the motel in Kingman but on the way out just before turning to go across the bridge a car zips out in front of me and I hit the brakes leaving a 4-5 foot skid mark and wonder why isn't this thing stopping. It does and I stay upright "whew". Glad I have the gear on. Also notice a few vehicles towing their motorcycles in rather than ride. I bet they tow it in to the hotel, dress up in all the appropriate vests, jeans and short sleeve T-shirts and go styling into town.

SATURDAY- A new day looms ahead and after getting some directions and good advice from several members, Ken and I take off north on Route 66 in front of the hotel and head for Grand Canyon Caverns. At the caverns we run into Art from Chapter 415 (L.A.) and he and I head down the elevator with another couple and the guide. After the tour of the caverns which is interesting, all three of us continue on Rte 66 toward Seligman, AZ and lunch. At Seligman, Rte 66 connects back to Interstate 40 further east from Kingman, but we decide to return via the way we came on good old 66. By the way, I came to California in 1952 with my parents and brother on this very highway and they got as far as Pasadena and said that's far enough. This marks my furthest point east on a motorcycle up to now.

After returning to the room, Ken was talking about getting a commemorative pin like the one I found in Laughlin so we geared up and headed out the 40 miles or so into Laughlin. On arriving at the Colorado River before we turn onto Casino Drive the temperature zooms up about 15 deg and it's hot. Traffic is now a moderate nightmare but we make it to the hotel and can't find the pin anywhere. I take off while Ken is busy feeding a slot machine and eventually find the pin. We stay for dinner at the Aquarius but the wait for Outback restaurant is 85 minutes so we head for the coffee shop. It's getting dark by the time we arrive back in Kingman. Ken tells me in passing a truck on I-40 I hit over 90 mph-good grief. Later that night I take his V-Star 1300 out on the highway for a 10 mile or so test ride.

IT'S SUNDAY. That's it for Laughlin and Kingman in the morning we leave bright and early for So. California and home. It is however 330 miles or so before we get there. Going back we encounter a number of other motorcycle riders returning home as well. Some are just plain nuts. Two riders on Harleys (not that it's important) zip past us doing maybe 80 mph and they are side by side in a side wind with gusts that can cause a swerve possibly leaving no margin for error. Other riders just zip in and out of our group with no respect for the fact we are in a formation. Takes all kinds. We make it back with just a breakfast stop in Needles (Need-less?) CA and a couple gas stops. Total 988 miles for the 4 days. I am beyond tired when I get home. I can't imagine there were any complaints on my riding in formation on the return trip even though I thought it was similar to how I rode going up there. Oh well that's it. Click the picture to go the the album on Picasa...