FRINGE MEMBER OF A SPLINTER GROUP

A previous splinter group was formed when the association started having only one official "Bike Night" but a group of members liked the idea of the weekly meeting so we just kept up the weekly schedule of meetings. 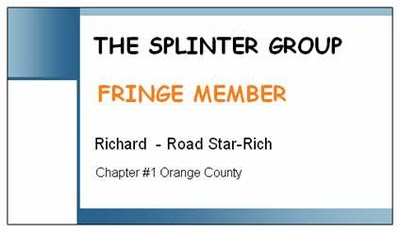 As of now, the first splinter group has generated a new "Splinter" organization to be called The Splinter Group, with everyone of motorcycle persuasion attending any of the previous functions to now be called Fringe Members (Fringees) if they so choose. These designations have been bestowed by our organization and are considered official pronouncements that can't be ignored. This is not any sort of negative reflection on the fine job done by our esteemed and brilliant leader but rather a recognition that the group has expanded and moved into a new dimension of enlightenment and splinterhood.
The Splinter Group leadership consists of fellow Fringe Members Johney as President and Founder, Tail Gunner & Ride Captain of this vibrant and potentially world-wide movement, along with Richard V. as Vice President. We have appointed all of the first group attendees as Vice Presidents in our new Splinter Group, but until they join up and agree to add their names to our roster will just state that there are about 7 potential members in line for possible appointments as Vice President Fringees, there will also be a Lady rider/member group known as Ladies of Fringe. Remember you have to be careful who you associate with.

If you wish to become a fringe member of this new "Splinter Group" a lengthy application process along with a physical exam and motorcycle skill review will not be needed, just show up.
Meetings will continue to be Wednesday Flag Ceremony and Thursday fellowship for Splinters and fringees.


A suitable patch to be added proudly to your vest will be available soon to announce your new association with The Splinter Group. This is in no way meant to replace or eliminate your valued membership in any motorcycle association, but should be considered an extra benefit that has been bestowed because of your steadfast association with other so called fringe members, and is our own private little joke!
Posted by Richard at 10:18 PM