Thursday at O'dark 30 or about 5:30 am I arrive at the Best Buy parking lot in Orange almost ready to ride with about 12 members of STAR Chapter 230.  What was missing- first I forgot the camera and second I had to put on the nylon rain pants I borrowed from Stan, plus my nylon yellow rain jacket over the Tourmaster Sabre jacket, as we head out on a cold and very damp morning.  More about gear later. 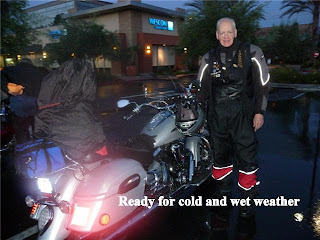 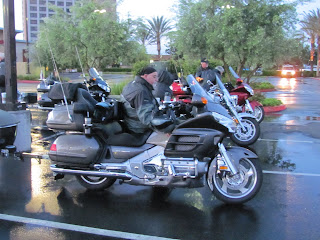 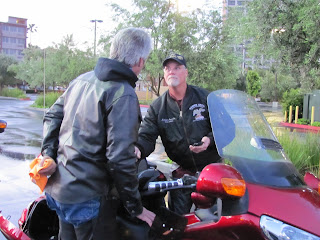 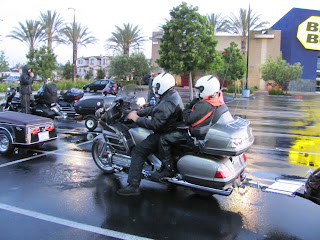 We line up and the group heads out on our 360+ mile journey back to Laughlin and Kingman, AZ for another Laughlin River Run 2010 and 30,000 other motorcycles and even more people.  Our first stop on I-10 in Banning is the Road House Restaurant for breakfast.  I put a red plastic poncho over the seat and tank for a rain cover and it turns out to be a wise move.   During breakfast it turns out we were hit with a rain shower and I did not have a wet sheepskin seat cover when I came out.  I decide to just have oatmeal instead of a heavy breakfast.  Starting out on these trips always throws my system off kilter and I never know what to eat.
We get back on the freeway heading east to Whitewater and the Highway 62 turn off through 29 Palms and Joshua Tree on to Vidal Junction.  From there through Parker, AZ and past Lake Havasu to Interstate 40 heading to Kingman, AZ.  Getting on I-40 we gear up with all the rain gear again as we see rain streaming down across the desert ahead of us.  We do hit rain, it is not real heavy but steady for a while.  Riding in rain on just two wheels does make for a more careful attitude toward leaning into turns but traction is there just diminished.
We arrive in Kingman and our plans include a dinner at the Golden Corral Buffet with other STAR members.The Golden Corral is a step above HomeTown Buffet and according to Johney Harper...Much better.  Instead of taking motorcycles our whole group goes by cab and on leaving we call for return rides.  Under the heading "This seemed like a good idea at the time" I ask if anyone wants to walk back to the Days Inn as I figure it's 2 miles and should be doable.  Scott, a retired police officer, volunteers to give it a go so we take off.  Scott sets a brisk pace and I am keeping up and after a mile and a half notice we are getting some rain, but it's "clicking" as it hits-what's this- hail, it's small but coming down steady.  Suddenly a white Chevy small SUV pulls up and we jump in not knowing who it is.  Turns out to be the motel manager and her daughter coming to our rescue and we drive the remainder in dry comfort.  It could have been anyone and we would have gotten in.
Since I forgot the camera, I borrowed Ken's but it had some problems so I borrowed a huge number of great photos from other members especially Susan Palaoro who took lots of on the road shots and pictures from parts of the trip that Ken and I did not make. 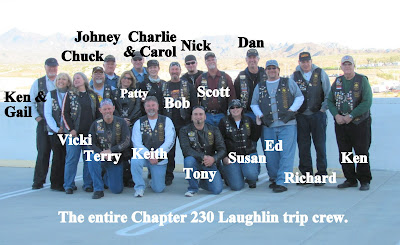 Picture at the Tropicana hotel
Next morning Friday our whole group including Bob Barbano and family along with Johney Harper head out to a STAR breakfast at the Tropicana Hotel with all 100 STAR members that rode in for this meeting.  Ken and I do a bit of shopping afterward and I find a hat and patch to buy and have sewn on my vest.  At 11:00 Ken, Johney and I head for a trip of our own to South Pointe Hotel in S. Las Vegas for corned beef sandwiches and a load of black and white cookies- a favorite.   From here after a gas stop we head to Hoover Dam and a look at the new bridge over the Colorado.   First we notice new roads and bridges leading to the big bridge and then the new monster arch bridge itself looms into view as we cross Hoover Dam.  It is a gigantic project for sure, but it's mostly visible while on the dam itself or hidden by the hills around the dam, so no way to stop for a picture.  Pictures below are near the dam but away from the the actual dam, plus a shot of Johney and the AZ sign.  We notice the water level is way down in Lake Mead and if it goes any lower they will need sponges to get water.  Heading back to Kingman is a long somewhat monotonous ride and the whole side trip is about 200 miles. 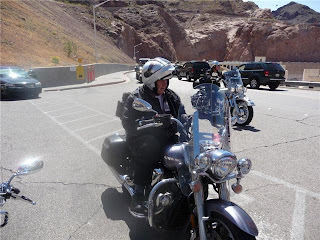 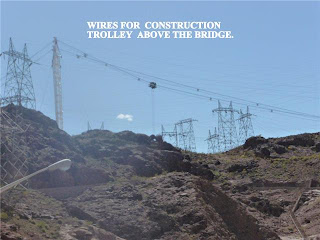 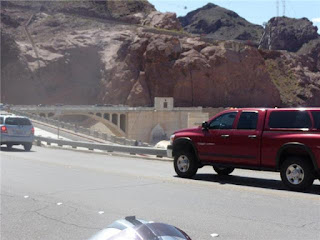 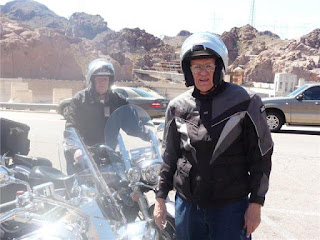 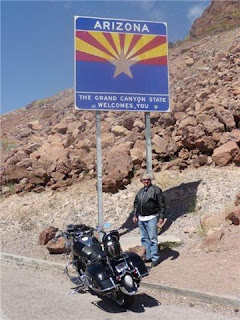 Back at the motel there are no dinner plans so Ken and I head for Cracker Barrel for dinner while several others order a number of pizzas and bread sticks along with various other liquid refreshments for the night.  There is a picture of Dan and Ed running back from the Basha's market across the street with several cases of something.

Saturday morning Ken and I make plans to head to Oatman, AZ on historic route 66 and then back to Laughlin for more shopping and ordering a custom patch for myself, Johney and Charlie. The rest of the group rides toward Seligman, AZ on Route 66 near the I-40 for lunch-we do not go on this ride. On the way to Oatman we pass a bad vehicle accident with at least one car smashed up and some injuries based on ambulance present. We turn off Hwy 95 to Oatman just 13 miles further on a badly maintained old Hwy 66. We arrive and the town which is only 2 blocks long is full of motorcycles. We follow some other riders to a dirt and gravel parking lot and park. We walk into town and stop in at a bar for a soda and see the walls covered with $1 bills usually inscribed with a name and date or other message. The wall paper is worth more than the building I suspect. It's about 10:30 am and we leave to avoid a rush and sure enough we pass hundreds of motorcycles heading to Oatman and limited or no parking...got out just in time. 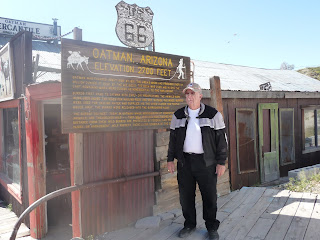 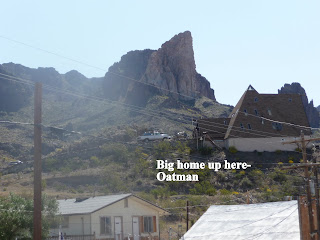 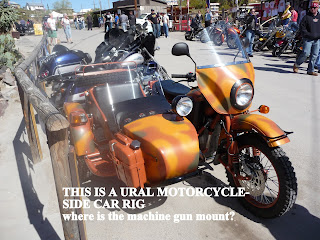 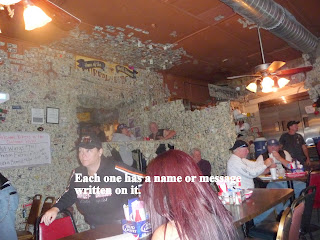 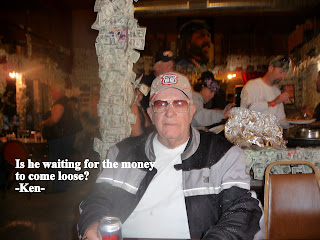 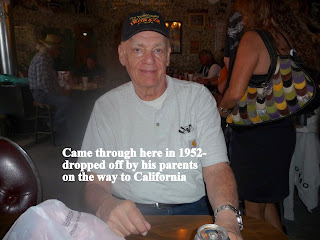 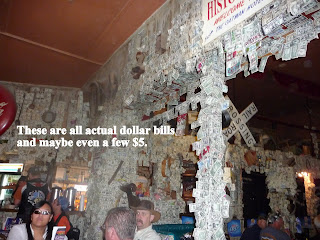 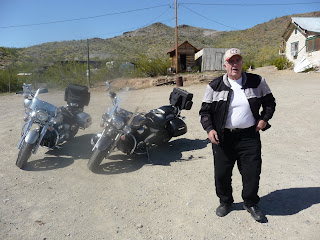 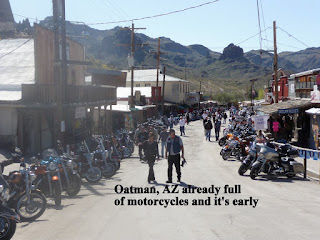 We motor into Laughlin on the main drag and the motorcycle in front of me with 2 aboard comes to a skidding stop at a light thinking the guy in front would go through the now yellow to red light.  "BAM" and down goes the front rider off his custom painted Harley...he was pissed.  I jump off and help pick it up but return to my motorcycle and get out of the way.  Shopping is mostly me just wandering around looking for a couple hats with Ken enjoying the air conditioning of the Colorado Belle Casino. 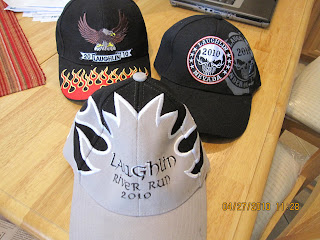 Saturday night a number of the group heads to a mountain resort restaurant but for some reason Ken and I decide to try Denny's and I have a small salad and he has a half order of nachos.  We could have had prime rib but I think the gravel parking lot and mountain road with animals running around kept us from going (again) this year.  Pictures show the restaurant along with deer or elk running around, we were not there. 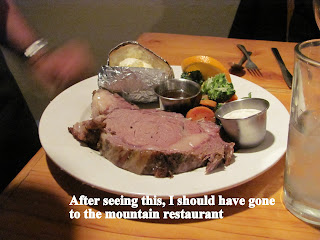 It's now Sunday morning and time to pack up and head out.  It's a long way back but now the weather is much nicer once we leave Kingman and hit Hwy 95 South past Lake Havasu where it really warms up to the 80 deg. range.
I wear my Tourmaster jacket with out the liner and with all the vents and zipper mostly open on the return tripand it is totally bearable even in the hotter temperature through Parker and Lake Havasu.  Packing up everything takes a bit of doing with all the hats and the rain pants & jacket I no longer need to wear.  Total gear included my nylon rain jacket, borrowed rain pants courtesy of Stan, my Tourmaster Sabre jacket with liner for cold temps, and my Draggin Jeans that I wore the entire trip.  The Icon Super Duty 2 boots I wear are comfortable but can cause Plantar Faciatis in my right foot for some reason.
Total miles over 1,000 for the entire trip.  I zeroed out the total trip meter so just an estimate.

SLIDE SHOW OF LOTS OF PICTURES.  SOME ARE OUT OF SEQUENCE DUE TO INTEGRATING SEVERAL CAMERAS.  SUSAN PALAORO PROVIDED THE BULK OF THESE.