Back to Tip Top for Breakfast

Tip Top Restaurant and German Deli is also a meat packing and sausage making plant.  They do it all there from what I understand.  If you are on the 5 freeway in Carlsbad and see the old windmill now a TGI-Fridays on Palomar Airport Road, turn off the freeway and head east to the first light at the Mobil station.  Turn right and when you see the blue awnings you are there.
We had two Newbies on this trip, both Don and Lynne had never been to Tip Top before.  It's about 65 miles down the freeway, we arrive and as usual there is a line to order.  I just get the ham and eggs, but most everyone ordered the "Big John" breakfast at just $6.98.  You can even go back for seconds on the meat, which is amazing.  I bought a pack of smoked sausage, but I'm not as in love with the taste as at first.
We gas up and head back as traffic builds both going south and heading north with us.  Lynne and I turn off on El Toro to head up Santiago Canyon as a little diversion.  Going past Cooks Corner's there is a big crowd of motorcycles and a huge number of cars parked along the road.  No idea if it is all related.
As we head up Santiago towards Irvine Lake we get riders heading toward us with head taps indicating some sort of police presence.  Going past the lake there are several Highway Patrol and a really big party going on with lots of cars, campers and RV's all over the parking areas.  We continue getting head taps and so maintain a normal but cautious speed and still no police until we come to Jamboree and find two motors around the corner with two cars pulled over.  Interesting that the signals from oncoming riders alerts other riders but the cars have no clue.
It was great seeing Don as he hasn't been around for chapter rides lately and Lynne seems to be busy with her classes and work so we lucked out with their attendance.  John and Stan are ready to ride at a moments notice and the only reason Johney H. wasn't with us he was busy in San Diego.  If you need a plumber be sure to call me about John R. he did a super job on our water heater.
Here is the ONE picture that I got and Lynne is the one taking the picture so she is not in it. 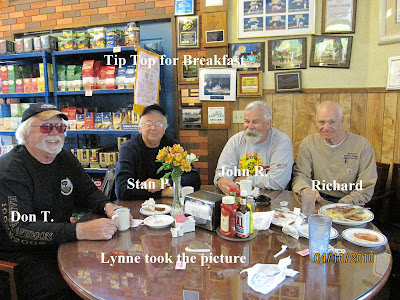