Long way around to Idyllwild. CA

The Idyllwild-Pine Cove area is located in Southern California's San Jacinto Mountains, which contain 10,804 foot high San Jacinto Peak, Southern California's second highest mountain, after Mount San Gorgonio. At an elevation of about 5,300 feet, Idyllwild lies mostly within a high mountain valley bisected by a small year-round stream, Strawberry Creek. Pine Cove occupies a ridgetop location nearly 1,000 feet higher than Idyllwild.
You can go to Idyllwild via two options.  From Banning off the 10 Fwy or from Hemet off Highway 74 (Palms to Pines Road).  We took the Palms to Pines route but went way down the 5 Freeway to Highway 76, past Pala Casino, past Mt. Palomar and past Warner Springs to turn up Route 371 to the 74 and then on 243 up to Idyllwild, CA.  Weather was cooler in the low 60's but never got below about 57 as we headed down to Banning on the way back.

View Larger Map
Everything proceeds as usual with our 8 AM meeting (greeting, catching up on news etc.) in the Best Buy parking lot.  One Birthday to celebrate and it was Carol W....HAPPY BIRTHDAY.

We line up and I'm in group 2 with Scott and Marie as lead motorcycle.  Terry led Group 1 and I could have been happy with either choice as both are very competent leaders on the road.  Total of around 20 motorcycles, with 5 count-em 5 Honda Gold-wings, these are becoming very popular among STAR members.  My Road Star along with Johney's are the only two of that model on this ride.  All goes well and we stop at the Pala Casino gas station.  I rate the pumps there as the WORST.  Most are out of order, and mine does not take a credit card, price of $3.11/gal. is not cheap by any stretch.

We regroup and head out.  Lake Henshaw a small wet spot at the base of Mt. Palomar is some 30 miles away and we stop for a potty break.  Here is where the calamity hits.  Scott and Chuck are lead motorcycles and Lynne is to my left, we are second in line.  For some reason, as we pull into and across the rather steeply sloping parking lot, Lynne turns to the right crossing in front of me.  I slow down keeping in mind the slope and suddenly right in front of me, Lynne begins to fall over and winds up hitting the pavement and rolling away from the fallen motorcycle.  Good Grief, how did that happen?  Obviously she did not take into consideration the slope and stopped at a bad angle with no place to anchor her footing.  I park and ran over and asked if she was OK and got a big "NO".  At that moment I realized I should have asked something less irritating to her such as...Did you notice how low the water in the lake was, or what do you think of the pavement condition, anything but are you OK?

A slightly broken left rear turn signal seems to be the only damage and Bob Barbano and a couple other riders quickly tape and tie it back into place, and it works too.  A bit delayed but no damage to Lynne either other than her counting this as the 9th drop.  I suggest we post a sign somewhere indicating how many days since the last drop.  She is a trooper and on the rest of the trip including the downhill ride to Banning handles her Yamaha with the great skills she usually has.

Arriving in Idyllwild it is no cooler than on the rest of the ride and Johney and I head for the Red Kettle for lunch, no one joins us and they head elsewhere.  Overview of Town Center, difficult to see but Red Kettle Restaurant and parking spot are tagged.  Double click to expand. 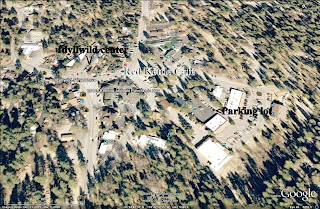 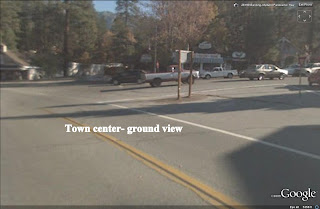 The real adventure seems to be the trip downhill to Banning.  It is a tight twisting, fast ride and what is most amazing I am able to keep up with Lynne (most of the time) where normally I would fall behind a lot.  Things really got crazy as we near Orange County on the 57 Freeway.  I see ahead that Scott starts moving over due to something in the road.  Suddenly his wife starts flapping her arms as a warning and I see a truck stopping or stopped in the lane as we head for it.  I swing to the right, behind Chuck and for some unknown reason he starts climbing on the brakes and rapidly slowing down.  As I don't want to get slammed by a car or another motorcycle from behind I whip around him and join up with the other scattered motorcycles as we get back in line.  Why the truck stopped is open to speculation as reports later confirm that it was a bicycle wheel in the road.  To me, stopping on the freeway with traffic coming at high speed can be deadly, but all ended well as everyone scattered and then formed back up with nothing more that a wildly beating heart and adrenaline pumping.  My rule from now on is- do not stop on the freeway in speeding traffic.
There are 15 pictures of the ride.  No on board pictures.

The whole ride for the day is 290 miles and I am back but very tired and wondering if the new motorcycle is more tiring for some reason.  Maybe a bit rougher riding or it vibrates more than the 2006 did but I am wrung out at the end of these long rides. 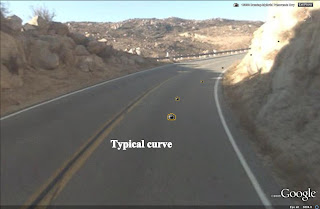 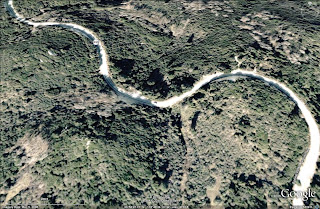 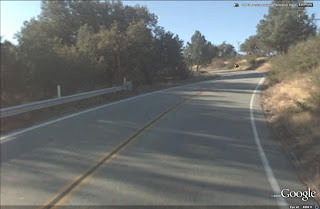 Heading toward Banning on 243. 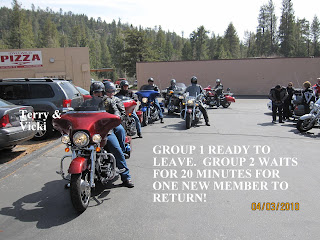