Our regular Week Day Riders group that had been meeting for local rides on Wednesdays was shaken a bit when our esteemed leader Rick Sherril decided to up and move to Phoenix.  He's probably happy in Arizona now that he can carry a gun on rides if he gets a permit, but that's another story.  Today, June 16 after checking around found two riders I had met from another group called Southern Cruisers Riding Club.  These two are both in my age category and both are careful mature riders.  Not to imply that STAR members are not, but just that their riding style fits mine quite well.  Other regulars from WDR's were busy, working or otherwise committed elsewhere.
I met Bob (Concho) at the Denny's messed up parking lot on Imperial this morning at 8:45 AM and at 9:00 AM we took off to meet up with John R. (Cuyo) at his home off the 57 Fwy and Temple Ave.  On arriving at his home and after looking around I did not take any pictures and Glad I did not.  His home is spectacular and has just about every entertainment amenity you could ask for including a 43 foot pool + spa and a connecting large rock waterfall, along with a 3 car garage that opens in front and also has a full size single car door in the back for drive through.  On the other side of the house is a large drive way area for an RV or maybe a large fire truck.  If my wife saw pictures of this place I would not hear the end of it..."Why didn't we get a house like that"  I am just one winning Mega lottery ticket away from a house like his.  I think he stocks the water fall with salmon, but not sure about that.
OK back to the ride.  After meeting his lovely wife Hortensia and a tour of the back yard, John comes up with a ride plan that he is familiar with, taking us up the 15 Fwy to Hwy 138 turn-off past Silverwood Lake and on to Lake Gregory, Arrowhead and then Big Bear.  Lots of curves, twists and loop-de-loops.  Sounds like a plan and off we go with John (Cuyo) on his Yamaha Royal Star Venture 4 cylinder 1300, Bob-(Concho) on his Honda ST1100 Sport Touring and me on the Road Star Silverado 1670 cc. 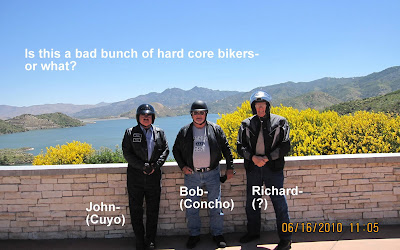 As we proceed up the 57 to the 210 and then on to the 15 north to the 138 turn-off, I can tell this is going to be a pleasant ride.  John is a very careful, accomplished veteran of group riding and even when we get to the twisting part I am able to keep up with him as leader, fairly well actually.  Bob, bringing up the rear on the ST1100 is another veteran of group riding and as tailgunner handles that spot like a pro. 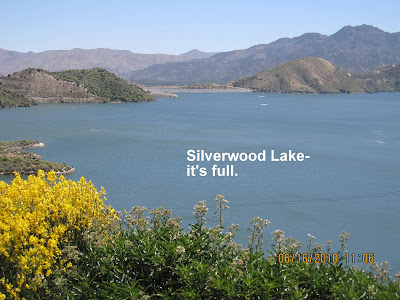 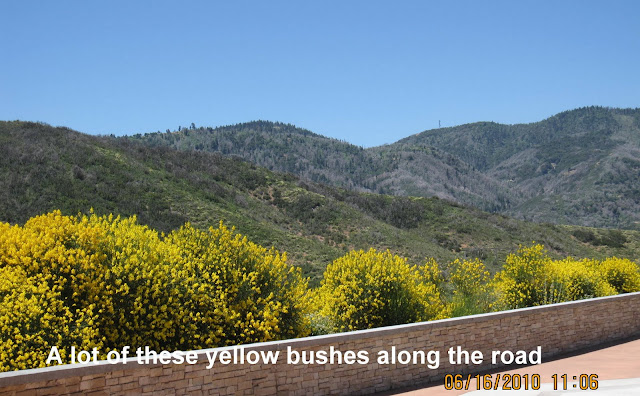 It started out this morning as fairly cool but even up in the mountains with the sun shining it's getting warm.  We stop at Lake Gregory and I remove the liner from my Tourmaster Sabre Jacket but it's going to get warmer later and this is not a lite jacket by any means. 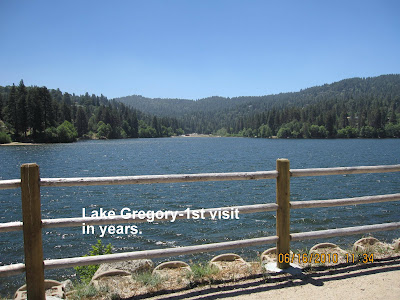 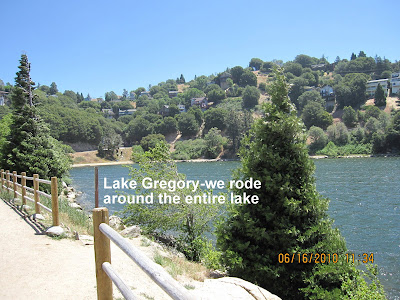 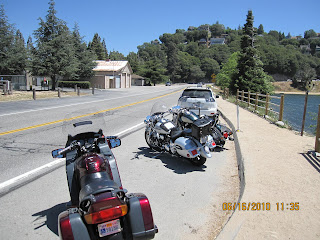 Bikes parked at the edge of Lake Gregory 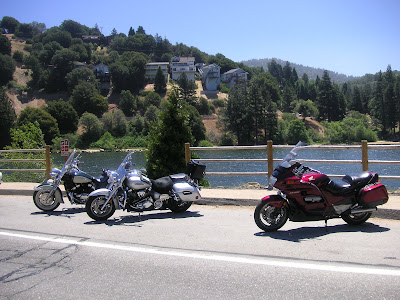 On the Left-John's Royal Star-1300, middle- Road Star 1670, and to the right is Bob's Honda ST1100 (photo-John)
We ride around the entire Lake Gregory and then head for Lake Arrowhead on Hwy 189.  There is no straight stretch of road in here at all.  Arriving at Lake Arrowhead we barely find a couple spots to park in the Lake Village parking area, once more reinforcing the notion that almost no one in Southern California works. 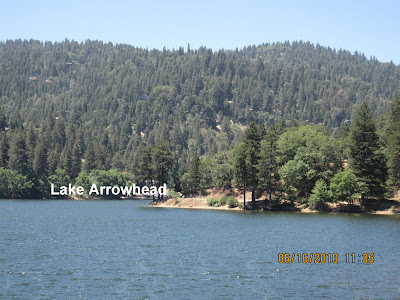 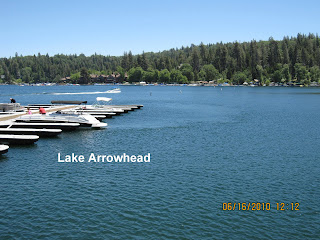 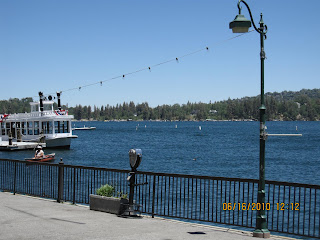 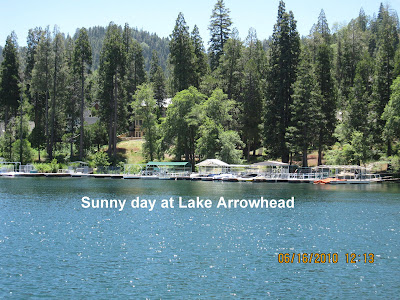 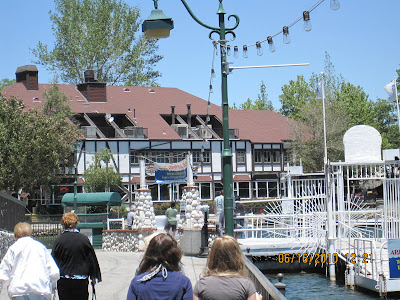 We leave Lake Arrowhead and head for Big Bear.  Traffic gets a bit heavier and the road a bit curvier on Rim of the World Highway. 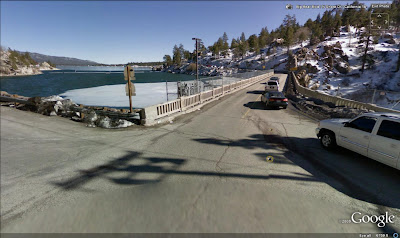 This Google Earth photo shows the bridge over the dam before the construction.  They are building a new bridge or widening the road not sure. 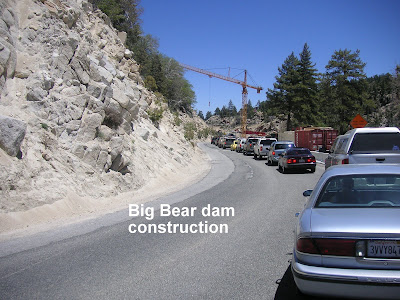 As we arrive at the dam holding back the water of Big Bear Lake, which is full by the way, there is a lot of construction but after a short wait proceed to our late lunch destination, the Grizzly Manor Cafe on Big Bear Blvd.  I did not stop and take pictures of the Lake.  John Stopped a couple times for pictures but I just passed the opportunity. 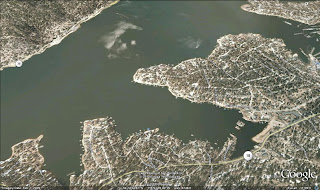 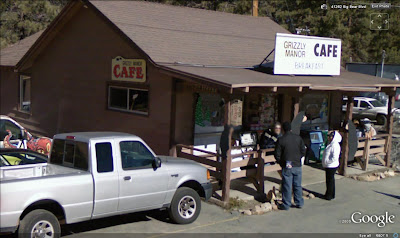 This is my third visit, but John and Bob's first...and probably only visit.  John had asked for a medium rare burger and got a well done one, as did Bob.  They were not impressed, and frankly after this last burger we can look for another place to stop in Big Bear next time for me as well. 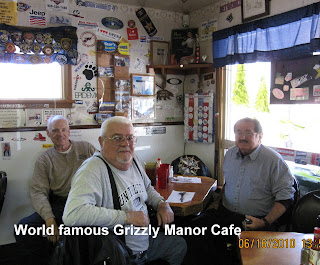 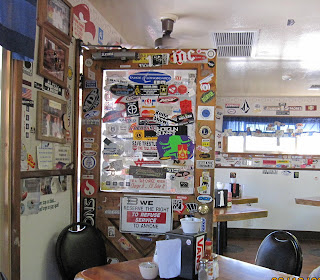 Back on the road on Hwy 38 toward Redlands and now it's getting warmer but I still wear the Tourmaster and once down the hill through all the tight up and down hill turns we stop at the A & W Root Beer place in Mentone before heading to the 10 Freeway and then the 57 Freeway to home.  I was tired due to the temps I think and came home forgetting all about it being Wednesday and Flag Night in the City of Orange.  In my delusional state thought for sure it was Tuesday instead.  There you have it, a fun relaxing ride in the mountains.  Arrived back at about 5:15 PM.  Total miles on this trip around 220. THIS PUT THE NEW ROAD STAR OVER 7,000 MILES SINCE FEBRUARY!
Posted by Richard at 9:51 PM