View Larger Map
Our regular scheduled first Saturday of the month chapter ride is going to Mt. Pinos up in Kern County (Flag 'E' on the map) with a lot of regular members and a few new guests as well. 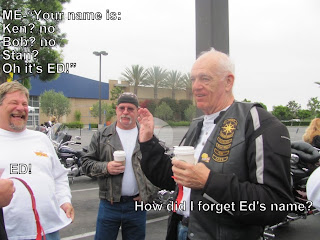 I totally blank on Ed's name, this is the moment it connected. 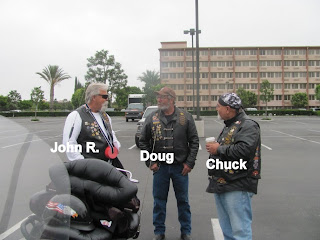 Our meeting at the Starbucks/Best Buy parking lot on Chapman goes well and things move right along for a quick start as this will be a long ride.  It is expected to be at least 340 miles and temperatures could be from a bit cool to fairly hot.  The weather while on a motorcycle is much more of a concern than in a car due to the nature of riding on an open motorcycle-windows are so over rated.  There will be two groups of 10 or 11 motorcycles in each group.  Some riders have passengers so the number of people total is closer to 30. 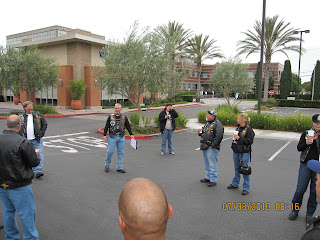 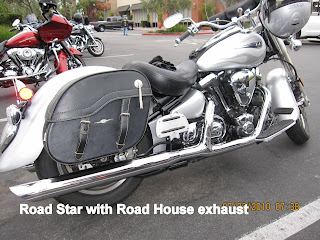 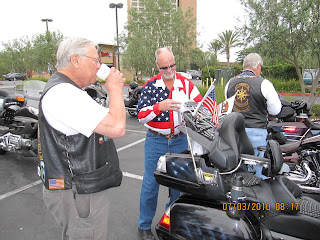 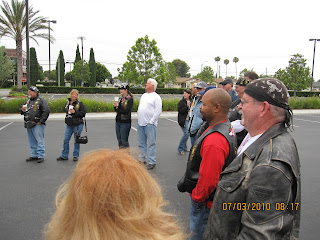 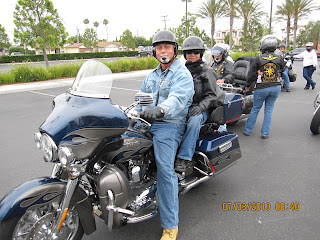 Several members need to be mentioned as they make all this happen for the rest of us.  There's Terry and Vicki-president and first lady, leading group 1, both riding on a Harley.  My group is led by Ed Palaoro and his wife Susan, both riding a Gold Wing.  Tail Gunners in my group-2 are Johney and Jim R.  Johney on his Road Star, while Jim is on his Venture.  John R. our raffle ticket guru is tail gunner for group 1 and so was Keith and Stacey I believe.  Some how it always happens that after the ride I wish I had done a better job of getting names of new attendees as well as who is handling what for the ride.  My attention span somehow evaporates in anticipation of the ride, or maybe it just my fear of the unknown, but my focus is on the upcoming ride.  All this could drive me nutty. 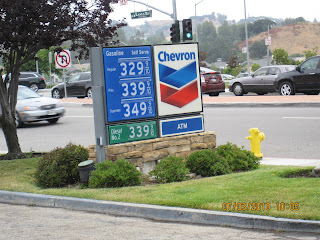 Our First gas stop on the 101 Fwy-I don't need gas, but look at the price. 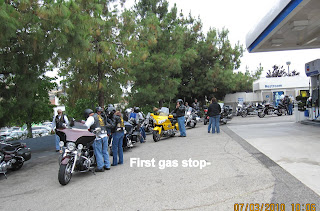 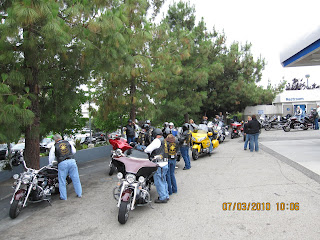 Virtually on every ride I marvel at the fact that I am doing this and at my age to boot.  I think of many of my friends from the financial business world like Bob P. or Phil L. and I know they wonder what the heck came over me to get into this.  I think one or two friends see how much the experience has changed my life and possibly wish they might have gotten involved years ago, but just never did, or they just think I'm crazy...take your pick.  On the ride to Ventura Harbor a few days ago, one of the guys asked my why I waited so long to get into motorcycling and I told him it just never occurred to me until my son bought one.  Yes, proving once more, insanity is catching, you do get it from your children.
If STAR 230 was only just about our monthly chapter ride, then it would be a nice way to associate with other like minded riders and get on the motorcycle for a safe and well organized visit to a number of local and out of the way places for sightseeing, and for some that is enough.  For me however it has evolved into real friendships and important connections with people I never would have met in any other way.   It's about rides to Victorville or Mt. Palomar Road in Carlsbad for breakfast, or going to Sedona for three days, or helping a friend deliver a motorcycle, or getting together every Wednesday and Thursday for a meeting and fellowship, or even just calling a member that has been having some medical problems and staying in touch.  It also about getting a phone call from Stan about bringing Genevieve (by car) to a flag night meeting since other wives are coming.  Lots of little things like those make it more than just riding a motorcycle.  As a comparison to other groups, in the 80's, I spent about 3 years as a member of Kiwanis and never once made any sort of real friend.  One day I just said what a waste of time and that was that.

Our second gas stop and I do fill up. 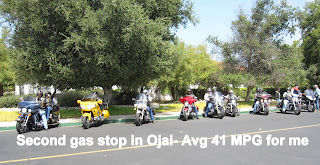 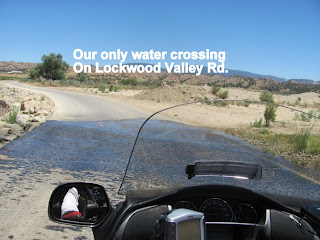 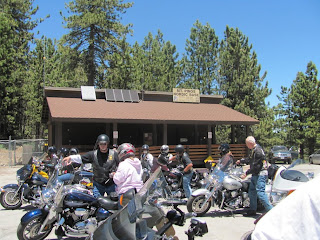 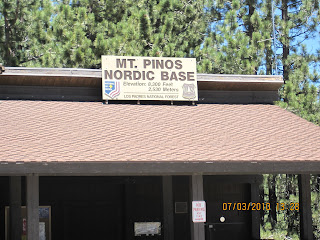 I nearly bit a big one on a downhill turn into a tight curve going over the yellow line and just barely pulled it out with no scrapes or other issues...WHEW!  The rider behind me, Leroy, on his new (to him) Victory Vision had quite a view and I gave him a thanks-for-not-running-over-me wave as I pulled up the hill. 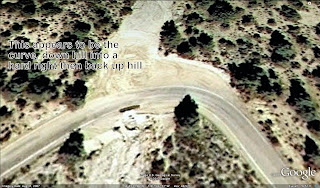 Actually up to that point and after as well, I was rather pleased with my skills on those roads.  Highway 33 and Lockwood Valley Rd. have a few rather nasty parts and you really have to be alert at all times, I was lucky or had the skill needed to stay upright on that and every turn along the way.

Group Two catches up with Group One at the Mexican Restaurant just outside Frazier Park at the 5 Freeway for lunch.  Food was passable and service was OK, all things considered. 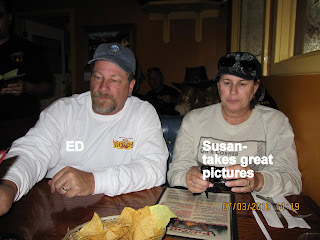 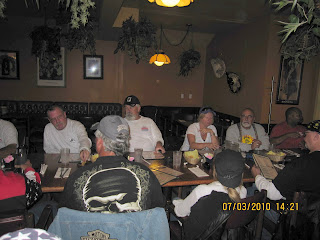 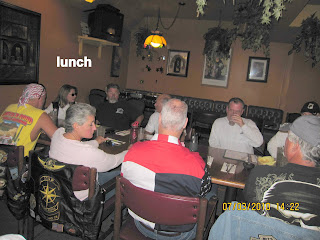 Ed took the pictures of the lunch crowd. 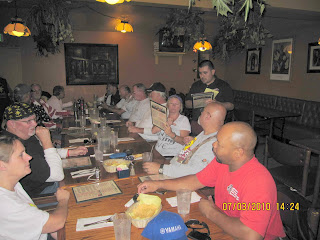 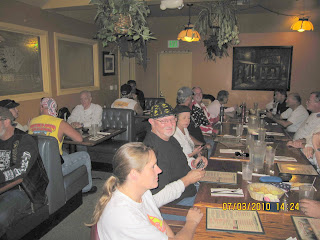 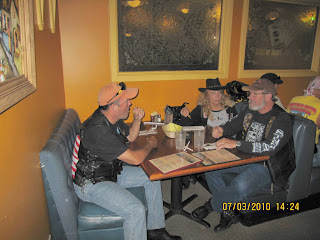 Lunch was interesting as they had limited staff, but service seemed better than initial reports from Johney about the poor service the week before, plus Johney bought my lunch.  Everybody had a good time and weather was cool enough not to make me delirious.  I mean how much can you write about while holding onto a motorcycle. 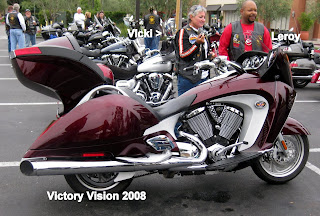 Victory Vision 2008
(Photo by Lynne S.)
One interesting side note, two riders, Glenn on a Harley Road Glide and Leroy on his Victory Vision, swapped motorcycles  on the trip between gas stops. 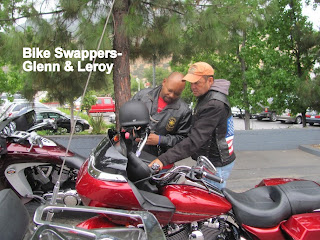 PhotoSusan P.
I had a chance to see how much the Harley vibrated while at a stop since Leroy was right next to me.

Arrive back at El Torito for final session and then home. 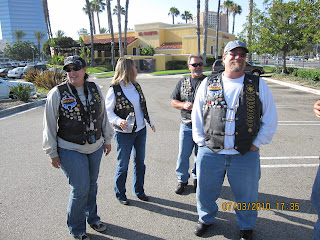 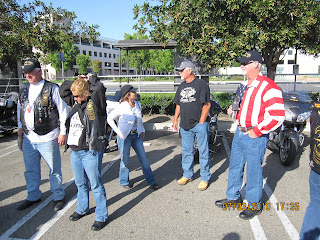 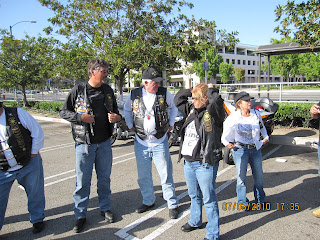 HAVE A HAPPY JULY 4th WEEKEND AND REMEMBER OUR ARMED SERVICE MEN AND WOMEN INCLUDING POLICE OFFICERS IN HARM'S WAY AROUND THE WORLD.
Posted by Richard at 12:44 AM