The Inferno Ride-was it hot!

Today we rode in temperature as high as 110 deg.


This morning I get a call at 9:45 from Luis and Minita asking where is everybody.  I tell him another rider had a crown come loose from a tooth and had to bow out due to the dental problem.  I did not know they were going to show up, so when I got the call about the tooth problem I just figured we will do a ride some other day, and then Luis calls-he's there ready to ride, so off I go.  We decide for no particular reason I can recall, to head on the 60 Fwy to Banning and then up Hwy 243 to the mountain town of Idyllwild where it should be cooler, down through broiling Hemet, past baking Lake Elsinore to the Ortega (74) Hwy and then home-a little over 210 miles.  This is going to be a perfect day to test my new Kool Vest to help cope with high temps while on a motorcycle exposed to the elements. 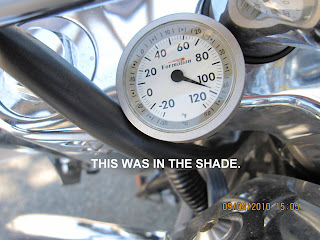 When I ride through mountains I always feel I'm a bit too slow but this time I can say I did relatively adequate at least.  Yes, had to pull over a couple time to let other cars and motorcycles pass, but that's OK as there is always someone wanting to go faster, oh yes and the guys on bicycles but they were wearing Spandex, and then there was this lady in her electric mobility scooter getting passed us but other wise we were good.  There are no pictures of most of the ride as it was just too hot to worry about a camera.  Luis and his wife Minita as passenger, are great riding partners who never complain and are very enjoyable to meet with.  Luis has been riding probably just two years but can run circles around me on his V-Star 1300.
I can say the Kool Vest was a worthwhile investment as this is the second but more brutal test I have done using it in the 110 deg heat while on the road.  You have to soak it and then re-soak it after about an hour, but with the heat this high it needed water after about 50 minutes or less.  When we stopped in Hemet at the 215 Fwy it was rather dry and warm from the 50 minute ride.  Replenished the water and off we went heading for Lake Elsinore and the Ortega Highway.  The moisture retained in the vest creates a swamp cooler effect as the wind rushes past while moving and it certainly helps keep your body core temperature much lower than it would normally be in these higher heat levels.  Definitely can recommend for summer use. 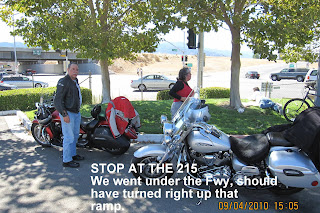 It was here at this stop that Luis mentioned after watching me ahead of him, how I could refine my handling skill in the turns by leaning my body less while doing the normal counter-steering to let the motorcycle lean more and smooth out the turns.  So when I head into a sharp turn to the left for instance, I push down on the left grip, pull up on the right but maintain my body in a more upright position thus keeping my vision focused far out into the turn as it should.  I have improved a bit this past year but I think this will help take my handling skills on those mountain curves and twists up one level at least.
After getting back home it's off to Blake's BBQ for rib dinners courtesy of a special buy one get one free coupon.
By the way, a GPS would be nice to have.  I made one U-Turn due to a missed freeway ramp and one ooops where we had to move over to the right lane in a hurry to turn to the right in order to stay on 74 in Lake Elsinore.
Posted by Richard at 8:12 PM