This was a Doozy of a ride!

The upcoming March chapter 230 ride was scheduled to go to Pioneer Town in 29 Palms and then up the back way past Silverwood Lake to the town of Crestline and return.   The week day Tuesday March 1, 2011 ride as proposed by Johney was to follow the route outlined for the following Saturday as sort of a preview of the road conditions and basically an excuse for a nice ride.  That seemed simple enough in theory but the reality became much more of an adventure than we bargained for.  Here are a few of the warning signs we ignored...
"Ed may bail out.  He thinks the roads will not be passable"

"Chance of success limited, return unlikely, pay zero" I wrote that one.  In spite of some trepidation about road conditions our hearty band of riders form up and take off at 9 AM on Tuesday.  There's Johney, Chuck, Ed in his truck, Carolyn and me.  Johney leads with Chuck handling Tail Gunner and Ed following along. Carolyn thinks this is a nice pleasant group of riders similar to the other weekday group, but little does she know, we secretly substitute a ringer in the mix.  Apparently one of Johney's early ancestors must have led the ill fated Donner Party and as luck would have it this time there was no cannibalism involved on our trip, otherwise there was plenty of snow along the road in Crestline.
We ride out to Fields Road on the 10 Freeway at Cabazon for gas, where Johney's GPS starts losing it's mind, then head out and up Highway 62 to the town of 29 Palms and Pioneer Town (my 3rd visit). 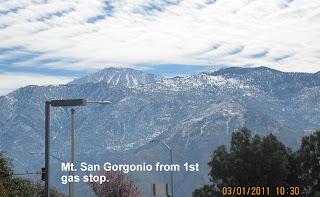 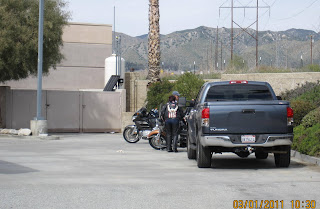 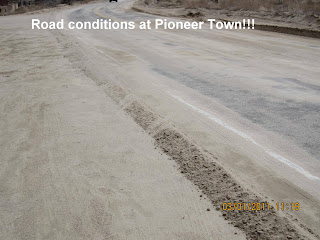 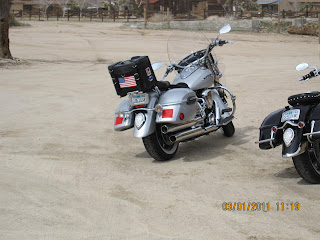 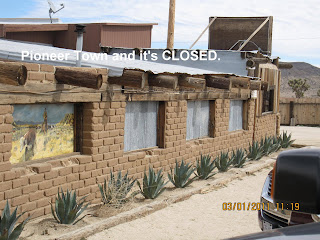 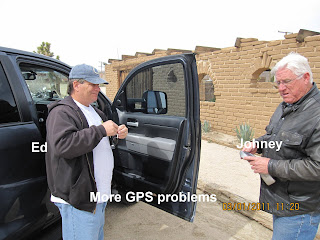 Whoops what's this?  Pioneer Town restaurant is closed on Tuesday and Wednesday, so no stopping there.  It's press on to Lucerne Valley and a small Mexican Restaurant, but first there are some dips in the road covered in sand and a bit of dirt along the way, but nothing too threatening.  We did pass a snow plow going the other way back to 29 Palms and I wondered if it gave up trying to get through somewhere.  Another ignored sign.
The following photos were taken by Ed as we drove toward our lunch stop... 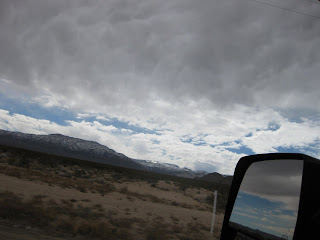 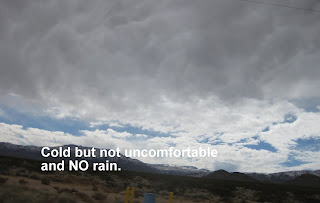 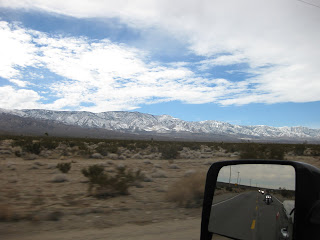 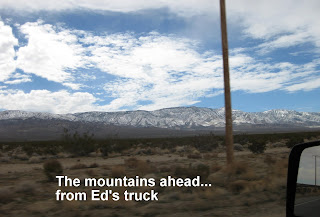 Cloudy sky, and cold but not really uncomfortable. 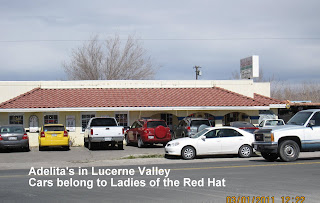 We get to our revised lunch spot and some good food along with a meeting of the Ladies of the Red Hat, whatever that is.  After lunch as we track toward Lake Silverwood we come to a running stream of water spread out over 40 to 50 feet of the road with a couple spots easily 4-5 inches deep. Another sign we ignored.
Follow along to see the whole route:
View Larger Map

From here Ed takes over the lead with his working GPS and promptly takes us on a trip going the wrong way, but quickly recovers and we are back on track towards Silverwood Lake and the town of Crestline- just 10 cold, uphill, tight, twisty, wet, cinder covered, treacherous looking miles of road beyond that.

I was on this road right behind Johney and looking at the pictures I don't believe we actually did that.  Carolyn was behind me and I know she was surprised (shocked) to see these road conditions as well.  Thanks to Ed for taking some great shots and leading the way into town: 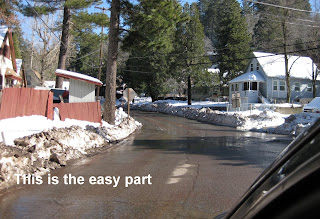 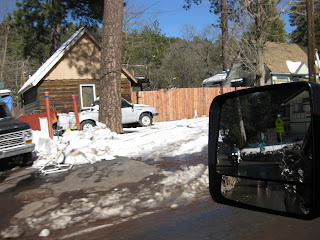 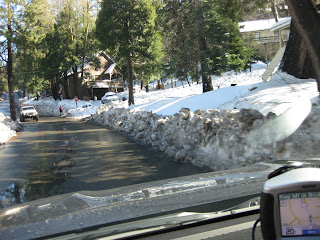 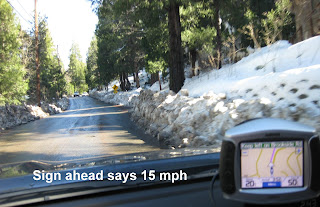 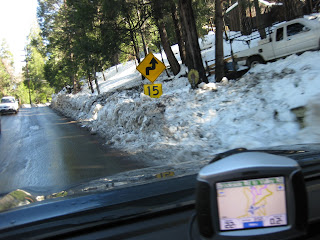 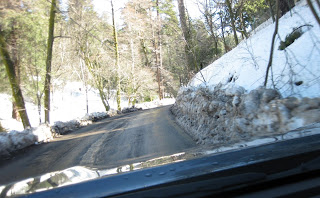 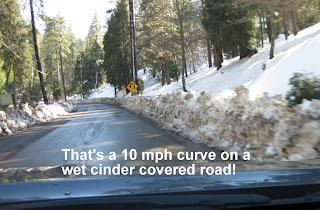 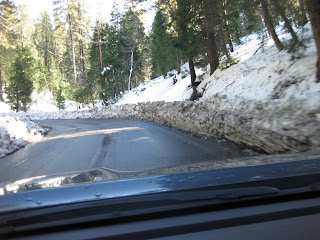 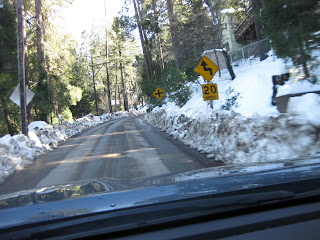 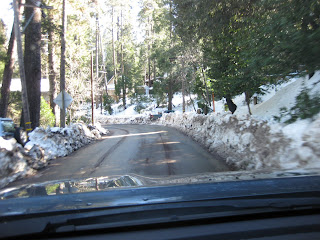 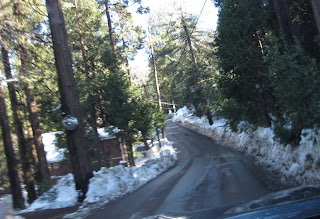 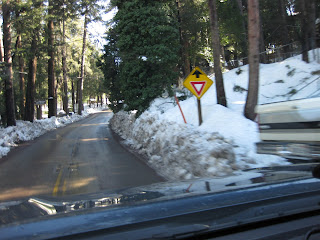 Temperature in the low 60's means melting snow and water runoff across much of the road still covered with all the cinders layed down to provide traction over the previously fallen snow.  There were very few dry places on the road leading into Crestline.  If you ride a motorcycle I'm sure you will appreciate the caution required in these conditions.


When we reach the center of Crestline for a much needed break from the stress of dealing with that treacherous road, Carolyn is ready to clobber someone in reference to who's idea was this trip anyway.  I can tell you looking at that uphill road and seeing snow traction cinders scattered all over the melting snow wet surface with very few or no patches of clean dry surface, I had the exact same thought.  What amazed me was that my tires did not slip over all that except for one spot in a small hole and otherwise performed fabulously.  This was Carolyn's first time in these sort of conditions and she really did very well.  She now understands the meaning of: What doesn't kill you only makes you stronger.

Well, we all made it, every one did great, I was more than happy with my handling on the entire trip and we certainly all learned something I'm sure.  My lesson seems to be if Ed is going in a truck instead of a motorcycle, pay attention.  From our stop in Crestline it is all down hill back to clean dry California.  Everyone had a part in making this a successful, accident free trip including Ed, Johney leading and a special note about Chuck as Tail Gunner.  He was a tremendous help in being patient with the group and not trying to rush anyone and stuck to his position the entire trip.  I don't know what he did in Viet Nam but anyone would be lucky to have had him with them in battle, as we were on this ride.

Oh yes and one other final note, Crestline is off the route for the monthly chapter ride.  Entire trip was about 275 miles, but this time the entire trip was defined by less than 10 short wild miles.
Posted by Richard at 9:35 PM