Sunday September 4, 2011 2:30 pm we arrive at Johney's door to pick him up for a trip to Carlsbad and the Tip Top Meat-European Deli and grocery for their week end special on Prime Rib.  I was just there Saturday, the day before, on motorcycles with John R., Luis, Stan for breakfast, and decided it was time to get back to Tip Top for the Prime Rib.  Breakfast at Tip Top is fairly good and the french toast with bacon is nice, not as good as Molly Brown's in Victorville, but this is one of John's favorites, and who am I to turn down an invitation for a breakfast run. They named a main breakfast plate after him, the Big John for $7.98 and you can go back for seconds on meats. 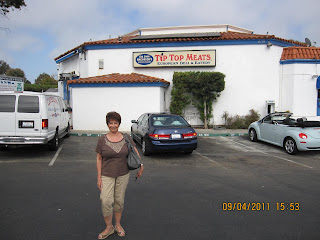 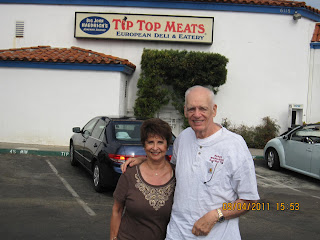 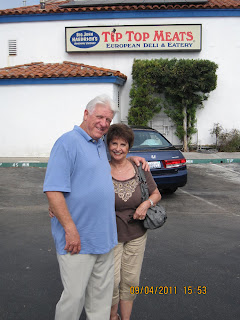 But I digress...back to the Prime Rib story.  Three words caught my attention...Massive, Prime Rib, and $9.98, four if you count Prime and Rib separately.  Tip Top is 67 miles from the door of my home down Interstate 5 to Carlsbad, and by motorcycle a nice trip.  Going by car turned out to be quite pleasant with Johney along to share the ride and dinner with us.  Time and the road just flew by and we were there in a little over 60 minutes.
Now for the evaluation of the main event-the Meal.  There was plenty of beef on the plate in the form of either 2 or three nice slices, along with a rather large baked potato, plus the addition of either sauerkraut or hot pickled red cabbage, with broccoli as an alternate choice and a roll as shown in the photos.  It comes to around $13 with a drink and tax.  Calling it "Prime Rib" may be stretching the facts a bit.  It is tender rib roast but not really what I would consider real Prime Rib compared to Lawry's or even Outback.  Plus it was a bit dry since it was rather lean or maybe it was how it was cooked, no idea.   Service at Tip Top is non existent so it became more like a camping out experience.  Run back to get more butter, get up for a drink refill, go get Genevieve some horseradish, go back for more butter-in those tiny square plastic peel off lid things, where's my missing bread roll, to heck with it.  Johney could not sit in his place due to to the person behind him pushing back, so he had to move around to the end of the table.  Hey, for $10 what do you expect? 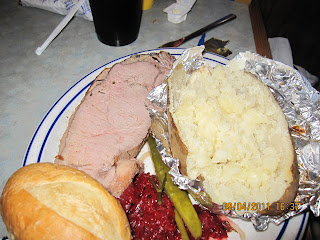 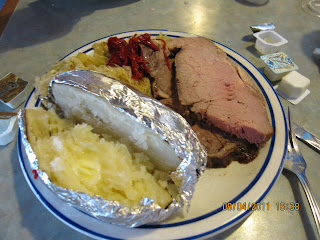 I almost forgot to take a picture, but luckily remembered before everyone really dug in. 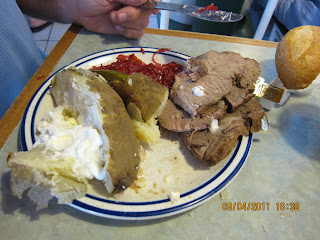 All in all, Tip Top is still on our breakfast list of nice weekend early morning rides, but we no longer feel a calling for their so called Prime Rib...BTDT (Been There, Done That).
Posted by Richard at 9:11 PM