Jan 2nd Ride to the Coast 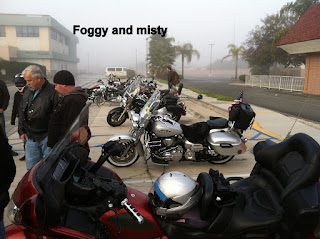 This was to be a simple ride from Westminster along the coast to a restaurant in Dana Point for breakfast on a holiday with Doug Reeves, his family and a few friends, but we learn that a STAR member was attacked by a bad case of SMAS prior to the ride.  My friends on the BeginnerBikers.org  forum know what I’m talking about but for those of you that may not have heard about this deadly scourge of contamination and infection you are about to be warned.
SMAS or Sudden Motorcycle Acquisition Syndrome is a dangerous form of some kind of infection that just by Walking into a dealership to buy a T-shirt, touching a motorcycle, handling a motorcycle brochure or looking on Craigslist and Cycletrader can cause a level headed person to whip out his or her checkbook, fill out pages of paperwork and plop down a bunch of money to buy a motorcycle they had no intention of purchasing what so ever.   It means you wake up one day and there is a motorcycle sitting in the garage or carport or parking space and you own it.  It could be new, used, mostly new or even quite old, the age or condition of the bike is not the primary factor in this syndrome.
Symptoms include a fever known as new bike fever, followed by an irritation and burning sensation around your wallet or pocket or a purse where you keep the checkbook, possibly a sudden curving of your fingers around handle bar grips and an inability to let go, and a host of other symptoms.  The finger curving may become permanent whether you buy the new one or just keep what you have.
In a future Blog report on this SMAS problem we will discuss SFLD or Shrinking Financial Liquidity Disorder. 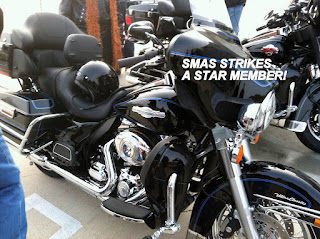 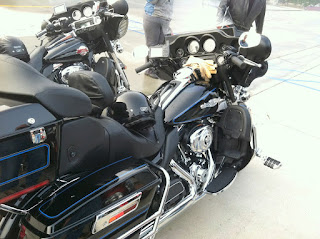 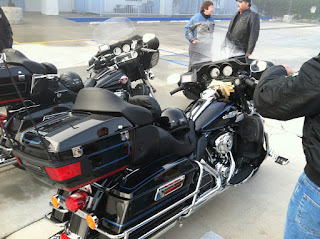 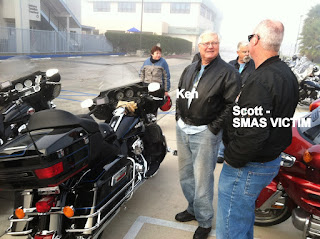 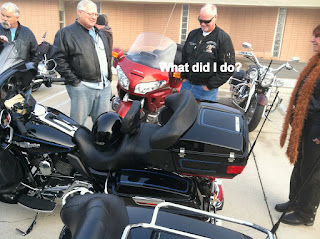 Who is this afflicted victim of SMAS you ask…none other than Scott Hamilton who along with Jim Rawlinson went to visit a Harley Dealer in Las Vegas to buy a T-shirt for Jim.  Somehow that innocent trip turns into a major purchase of a 2012 Harley Ultra model as shown in the photos. For those readers not a member of STAR, just be careful about what you touch or look at when it comes to motorcycles, I made every effort not to touch the Harley for sure.  If a friend says to you let's stop in at the Harley dealer I need a T-shirt...run, run as fast as you can.
NOW BACK TO THE RIDE:  Around 8 AM everyone starts to arrive for departure by around 8:30 AM and we wind up with about 13 motorcycles.  Attendees that I can name include: Doug our ride leader and organizer, Cindy his wife, Greg- his son and his wife.  Also, John R., Carolyn, Scott and Jim arrive together, Tony, Ken I. from Mission Viejo, Me and a couple rider friends of Doug.   Luis and minita on the V-Star 1300 are last to show at 8:20 and they live just 10 minutes away.  It’s foggy along the coast but we manage to stay together even with the fog and traffic lights making it a bit touch and go along the way. 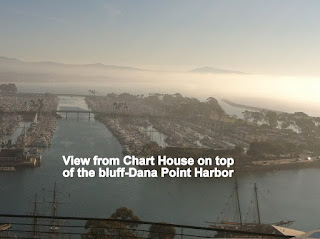 I reached for my camera and found that I had left out the SD card so I had to use my I-Phone.  The pictures are adequate but not as good as the Canon compact I use. 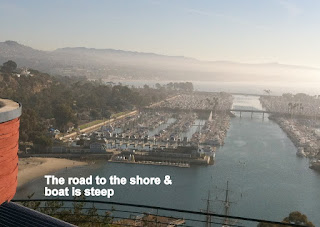 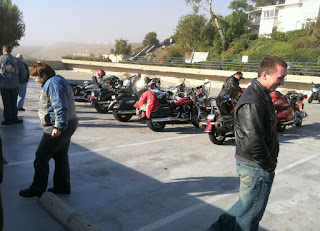 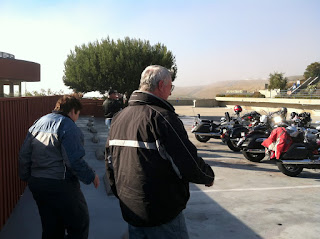 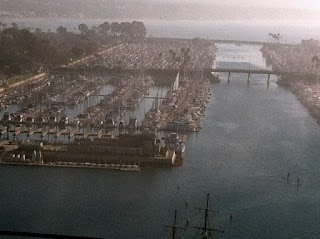 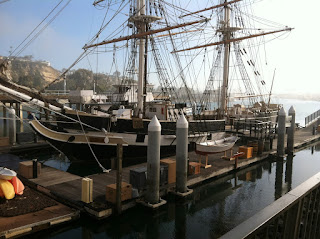 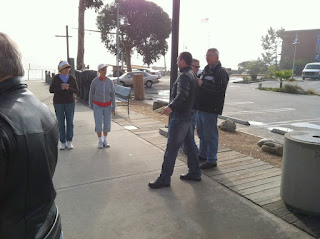 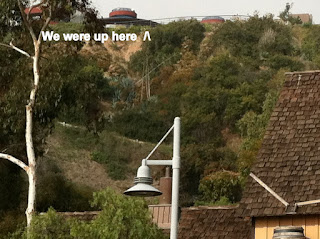 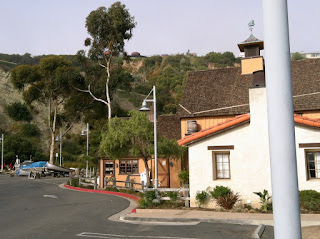 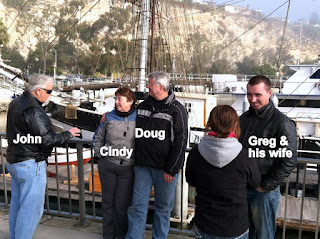 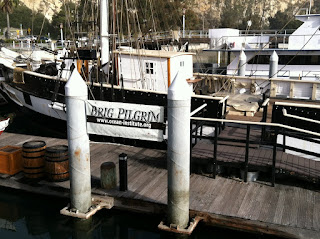 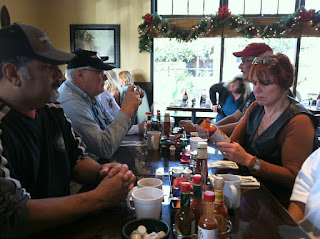 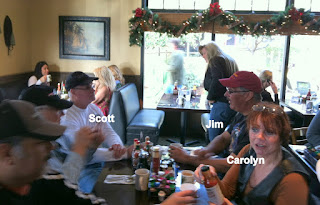 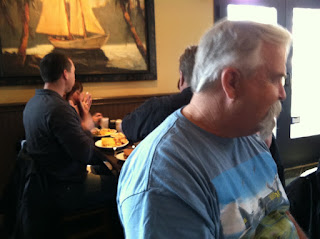 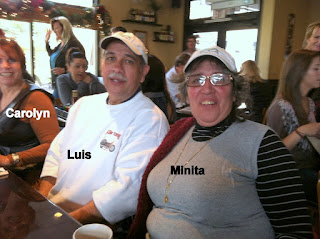 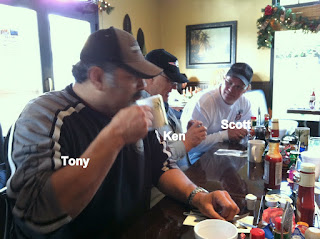 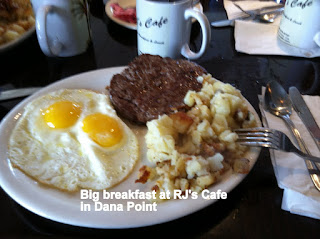 I ordered this, hamburger patty and eggs, excellent! 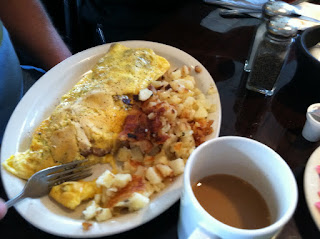 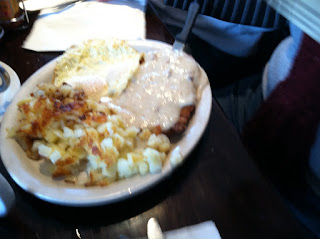 Minita ordered this, could feed a village. 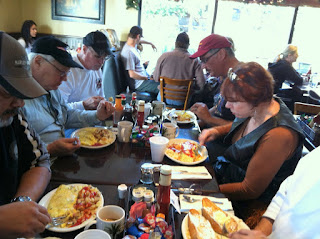 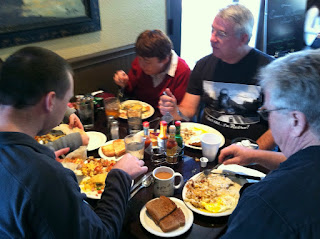 A quick stop at the Chart House harbor restaurant overlooking the Dana Point Bay and then on to RJ’s Cafe for breakfast, which took a while for us to get two tables to hold all of us.  After a rather large breakfast we all headed for the I-5 and home.  Another pleasant day shared with some wonderfully friendly folks and we even may have picked up a new recruit for STAR as Tony has never been on one of our rides.
Posted by Richard at 4:50 PM

Richard, I have experienced that syndrom twice is my life. It really grabs you and won't let go until, you have your hands on the grips and holding on!!! It is a real illness!!! LOL Loved the ride! Carolyn