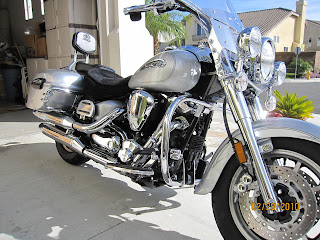 In an effort to prove I am not emotionally attached to my 2009 Road Star Silverado “S” and after that bike swap ride to Long Beach on Stan’s Roadliner I am taking the first step to move up to a Stratoliner.  It may or may not happen depending on the sale of my current ride or finding a deal on a 2007 or 2008 Stratoliner or even a similar Roadliner.  I am trying to avoid the 2006 only because of some reported stalling issues with that first year model but otherwise it is still an outside possibility.


Compared to my last motorcycle purchase fiasco, this will be far less insane with only a tinge of psychosis.  This time, if I don’t sell the Road Star there is not likely to be a new motorcycle but maybe still could add a used one to the stable.  I have plenty of role models around here with multiple motorcycles in their garage to use as examples of the multi-Motorcycle-Mania.


I can only speculate but imagine there is a support group somewhere for people that need to buy and sell motorcycles.  Our current leader includes one member that walked into a Harley dealership with a friend that was going to buy a T-shirt and he walked out with a new Harley Ultra.


We shall see what happens but hoping Craigslist still can work some magic.