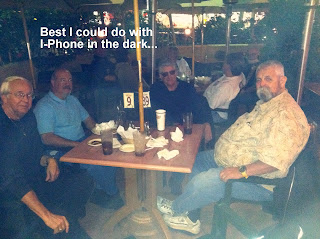 A fun and successful Thursday Bike Night here at Tutto Fresco with a great turn-out including Joe-Victory, Chuck & Patty-Gold Wing & V-Star, Ed & Susan-Take your pick, Stan-Roadliner, Brian-GoldWing and the Other Brian on the Harley, Carolyn-Harley, William & Daveta Jo-Honda, Johney-Road Star, me-Road Star, Wayne-V-Star-slipped in quietly and finally Glenn-Harley. Our THURSDAY NIGHT group is referred to as Friends of Stan (FOS) and it occurs to me that we need an identity to differentiate us from any other groups. When you read e-mails or on Facebook about our "BIKE Night" be sure you realize this is NOT part of and is not affiliated with any organization what-so-ever. This group is not my group or even Stan's it belongs to everyone that shows up for our Thursday meetings, I just write up the reports as I see it. There is no membership, no dues, no initiation, no motorcycle required, no patch...nothing*, it's just our friendly get together. From now on it's known as FOS (Friends of Stan) and also the Orange Motorcycle Group, unless someone wants to contribute another name. We could form a committee, but the committee selection committee is possibly on a ride somewhere.
I had a chance to report on my rides today with Stan and John R. regarding swapping motorcycles for a short demo ride to Long Beach and back to Cerritos. I really liked Stan's 2007 Roadliner, but John's Stratoliner with the "Dark-side" car tire completely caught me by surprise. I forgot he had that tire on there and could not figure out why this thing would not lean. It felt like driving a wobbly truck with no power steering...yipes. After the rides my only thought was now how much will it cost me to upgrade to a Stratoliner and why did they let me ride their motorcycles in the first place.

Three of us on the ride today, Stan, John and me, visited with Ken Yunk as he has been suffering from some blood clots to his lungs and has impaired breathing difficulties plus congestive heart problems. Some of the aspects of membership in a motorcycle organization are fellowship, comraderie and brotherhood or whatever you want to call it, and to me it means keeping in touch and letting him know we are here for him. If you would like to send him a card or note, just reply to me and I will send you his address. I don't want to put it here unless you are interested.

Carolyn thinks her Harley is running better even though the service guy at Harley said they couldn't find any problem. On our Monday Weekday group Ride to Barstow, gas mileage was less than it should be according to her estimates. Daveta Jo made it to the meeting with dilated eyes due to an exam and could not tell if I held up three or four fingers, but was OK to drive, the optometrist gave her an 11 foot red tipped cane so she could feel her way along the city streets, told her-just keep off the freeway. John R. did not make it to tonight's meeting as his holy roller chopper motorcycle went into the rapture and croaked (again). 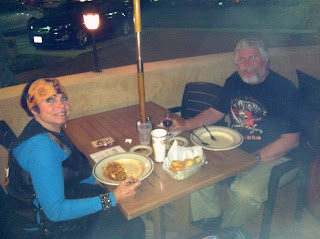 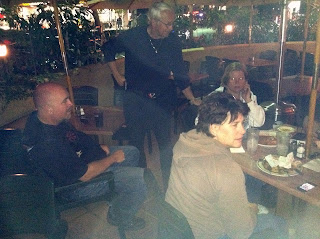 We wrapped up and said our goodbyes until next time. The third Thursday 2/16/2012 the Orange Motorcycle Group (FOS) will be at 5 Guys Hamburgers on Katella and Tustin Rd. in Orange. (unless Glenn or someone important complains). Now the thought just occurs to me that Orange is sort of a Harley color, it's not a Yamaha color that I know of.

NO NO NO I just could not resist putting this in. That's not real.
Posted by Richard at 12:10 AM