When I woke up Monday morning to get ready for our big Week Day Riders meeting and trip, I knew there was a problem. I just did not feel well at all but hoped it might get better as time progressed. Either too much Super Bowl food or some kind of bug, but it’s disappointing either way. I meet with Carolyn (STAR member) at Imperial Blvd. who is right on time as usual. 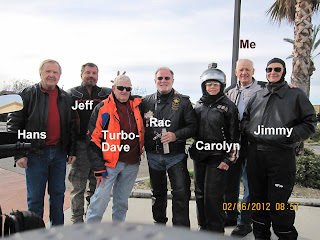 We rode up to our first stop off the 210 where most everyone was waiting including Jimmy-long time friend and rider, Rac-President STAR Chapter 500, Turbo Dave & Hans-both experienced and very competent motorcyclists, Rac’s friend Dave, and Jeff. It was good to get a chance to meet up with some riders that I have not seen in quite a while. I was telling everyone I might not be able to make it but was feeling well enough to press on. Carolyn needed to refuel as her Harley Soft-tail was just burning up gas for some reason. After introductions all around and a group photo we took off heading for the I-15 and Hwy 138 where we pick up Ken-STAR member and CSI Jim-SCRC rider. The timing schedule worked perfectly as everyone arrived at the right place at the right time.


Back on I-15 towards Victorville and Molly Brown’s for breakfast and a chance to get better acquainted with the new Week Day Riders group. As we walk in they have a table ready for all of us, how awesome is that. 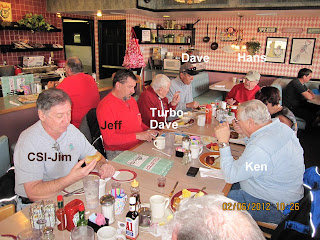 Breakfast ordered and quickly served as well. Carolyn ordered something meant for a group as it was huge, big enough for her to eat the next two days. Jimmy had never been there and I think a couple others as well. We got talking about some riders that have dropped out from the scene and hope they eventually find their way back to motorcycling. I was again having some discomfort and decided to bail out of my own ride…how crazy is that-but I’m glad I did. I really felt bad having to make an exit, but was very fortunate to have Ken and Rac there to fill the gap. I’m not really a ride captain normally anyway and since they both had CB Radio and Navigation were the perfect choice to lead and tail gun the group on the route I had outlined. Oh yes, and who shows up at the very last minute as we exit the restaurant...? None other than our mystery guest, Wayne (STAR member), who as everyone gets ready to leave decides to join me for my return ride back home, which is nice, but I'm wondering why he rode all the way there without telling anyone.


I want to thank everyone for participating and sharing from what I understand turned out to be an enjoyable and safe ride that went very well with Ken's competent leadership and Rac tailgunning. I am sure we will do this again and while it is best to keep the group to a max of 10-12 riders want to keep it open to anyone available during the week. No big party the night before for me for sure!
Posted by Richard at 10:39 AM