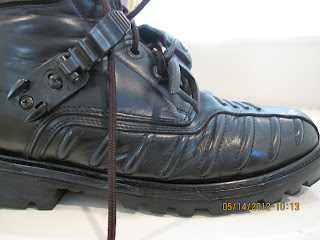 The uppers are in good condition

My current pair of Icon Super Duty boots were in need of new rubber on the bottom after many miles and several years of use and the idea of putting new soles and heels popped up instead of buying new boots for $120.  Found a boot and shoe repair place on Ball Road right near the 57 Fwy in the same location as a German restaurant so took them in.  Was originally quoted $68 but when I picked them up the price jumped to $75.  Not especially happy about that but he did a good job, so now I have my same comfortable fitting boots with a whole new set of soles and heels ready for the Colorado trip. 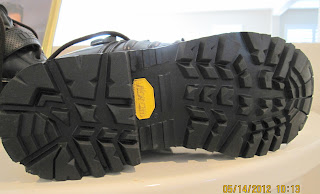 A much beefier tread pattern than original
Maybe these will not be so slippery compared to the original.
Posted by Richard at 10:55 AM