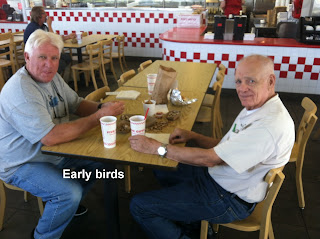 Tonight’s 230 Bike Night meeting in a new Costa Mesa location was not a good turnout it was GREAT! We had a superb group in attendance considering it was a new location and several regulars were unavailable for various reasons. For instance, our President Ed is recuperating from major surgery with a complete new aftermarket knee replacing the OEM version installed at birth. It will definitely be a while before he is back on two wheels, so for now, aided by his 4 legged walker modified with high speed tennis balls on two of them, he will be zipping around the house in no time. I visited with Ed and Susan to see how he is doing, and who else is there but Taz-Richard Green our new Sgt. of Arms among his several duties. Chuck on the other hand is out trying to even the score over a bunch of birds dropping their “markers” on cars by flocks of Doves. He heard someone put out a contract on several hundreds of those pesky flying things and will be out there to collect on a big hit by shooting a number of them as an example. Daveta Jo is still dealing with a vertigo problem and Stan had to attend to other plans as well.
I left my visit with Ed and got on the 405 Fwy to head to bike night on Harbor, thinking it was quite a ways down the road. I entered the freeway and after a couple exits there’s Harbor and before you know it I arrived at 5 Guys. Did not have to wait long until Wayne wearing his "Old Guys Rule" T-shirt rolls in, then Johney and the rest of tonight’s attendees start arriving for the first meeting here in Costa Mesa. 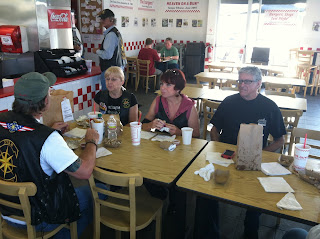 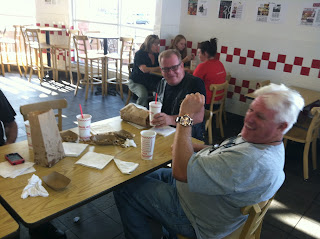 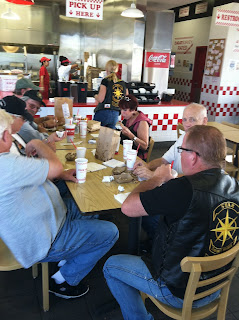 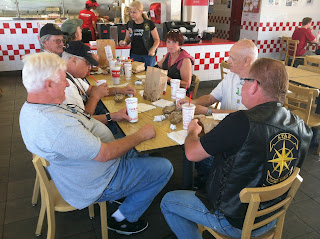 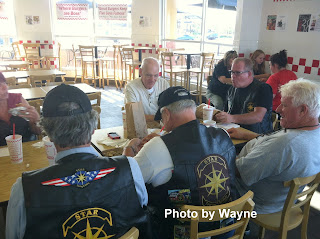 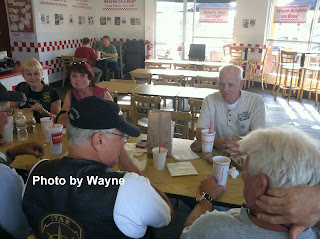 Wayne on his V-Star 650, Johney, then Carolyn-on her Harley, Ken Indorf on the Gold Wing, Ralph Lewis from 415 on his Road Star, Rick & Barb on the 950 V-Star, Bill on the Trike, and finally Brian H. all made it a fun and warm meeting as is usual for our group. Ralph is from 415, has ridden with us previously and I even had the privilege of acting as his Shepherd but since he is an accomplished and skillful rider it was just no trouble at all. Rick & Barb live close by and if we change to another location down the street closer to Huntington Beach, they might be able just to walk to Bike Night. 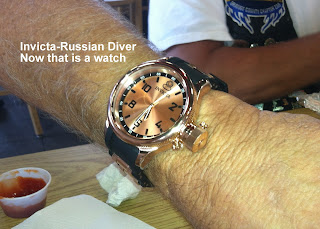 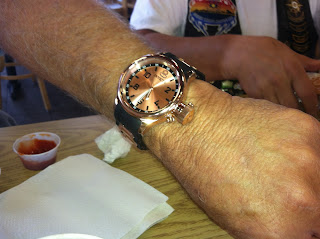 Tonight was the big unveiling of a new and important acquisition in our group with Johney arriving and showing us his new Invicta Russian Diver watch. It is bigger than I had imagined after seeing the photos and is really impressive. Those things are huge; just ask anyone that owns one. Before you know it someone else will own one, due to SWAS-Sudden Watch Acquisition Syndrome, I’m betting.


It can be difficult trying to relay all the topics covered at tonight’s important gathering, but luckily we had Carolyn there sharing the experience of trying to add to the star tattoo on her neck. I think the tattoo artist wanted to jab just one point or pixel per day to keep the pain down, making the job last for years but that would not work for Carolyn, or maybe she just did not like what he planned to do but either way no extra wings or anything added as yet.

Ken will be leaving soon to meet Gail in Sweden on her epic European tour and Wayne and Mitzi will be jetting to the Philippines for a long visit.


The upcoming Chapter ride to our local mountain lakes including Arrowhead and Big Bear will provide another opportunity for one or two ride captains to see how fast their GPS can correct and re-route after missing a turn or two, should be a fun and entertaining ride as always. 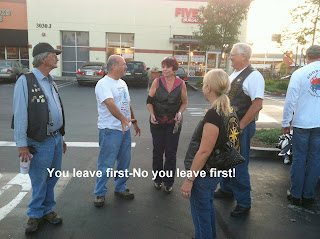 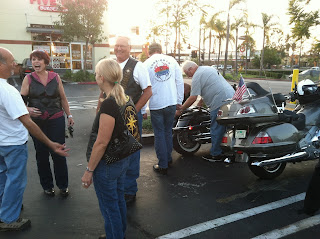 I ate too many peanuts as usual, but everyone was having so much fun and good times we all hated to leave it seems. Don’t miss another fun event like this…we do it every Thursday including Sept 6 at 5:30 PM and will be at Blake’s BBQ on Mira Loma 2 blocks west of Kraemer Ave. in Anaheim.

I get home and the latest issue of RIDER Magazine arrived with the front cover showing “6 Ways to Soar-the Latest, Most Exciting New Motorcycles”. Too bad there was not one Yamaha among the bunch, but there was no Yamaha advertising in it either