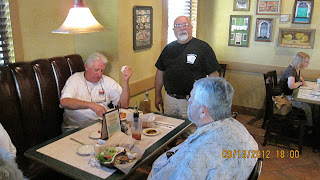 t starts with one person then there are 5 and soon more arrive until we have a group of 15 in attendance for tonight’s Chapter 230 Bike Night, making it a solid turnout for a warm Thursday evening at Tutto Fresco in Orange. Ed seems to be doing a little better as his rehab therapy progresses on his recent knee surgery. Next on our medical roster is Daveta still dealing with a case of vertigo, and then Stan shows up with Connie in a wheel chair recovering from an ankle injury. Johney is recovering from a head and chest congestion problem but my hot towel sinus treatment method helped speed up recovery a little or at least I hope it did. Chuck is still helping his step son who also had knee surgery, but the tile people made him arrive a little late tonight. That’s the medical report for our group of the walking wounded; let’s hope it does not get worse.


Tonight’s attendees include Ed, Susan, Johney, Joe, Chuck, William, Daveta, Carolyn, Glenn, Stan & Connie, Doug and Cindy, Brian, and me for a total of 15. Brian arrived a bit after I had taken the photos, so again he is left out, but we are appreciative of his effort to attend. One problem seems to be solved, that of Doug and his Gold Wing with the leaking shock absorber. Dealer was able to find and fix the problem rather quickly and hopefully it will not re-occur. I have to mention that Glenn had a good time banging his head three times on the light fixture hanging above him, (see photo) it must have helped clear his thoughts.
Ed was providing a crash course on knee mechanics with a couple x-rays thrown in as visual aids...we should get a copy and post it here if possible. Other news included the new 2013 lineup of motorcycles from the STAR line by Yamaha. This is not an objective report due to hopes of seeing some major upgrades or changes but the only new model of any note is the V-Star 1300 in a new “Deluxe” version with fairing, GPS, other electronic gadgets, hard bags and no sissy bar very similar to the Stratoliner Deluxe model upgrade. There appears to be little if any changes on any other model except for a lighter clutch pull on the Stratoliner/Roadliner models. They still have Royal Star Tour Deluxe’s from 2009 in the pipeline as well as V-Star 1100’s from 2010 still listed in the 2013 lineup. 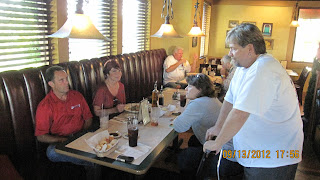 Our President Ed is having one heck of a year with more drama to contend with than we can fit into 5 episodes of Days of Our Handlebars and now knee surgery, our hope is that he will recover soon and be back on a motorcycle and looking forward to a second term as president of Chapter 230. I certainly think he has been doing a stellar job, plus he laughs at some of the stuff I write, what can I say. Our next meeting location will be announced shortly, watch for e-mail bulletin and also on Facebook. If you are not linked on Facebook let me know. 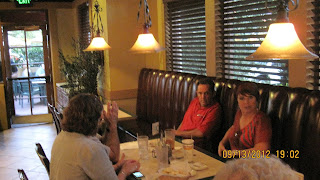 Glenn could not avoid hitting that hanging lamp. 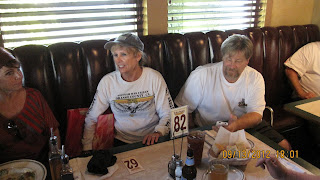 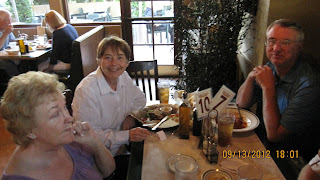 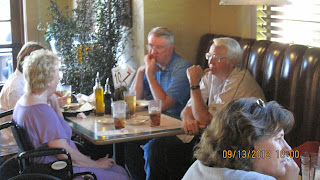 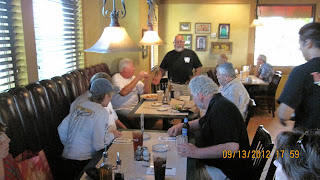 Special added feature: last Tuesday, Chuck, Carolyn and I rode to RJ's breakfast and lunch cafe in Dana Point and had a great breakfast. 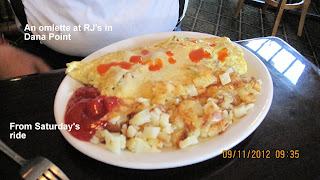 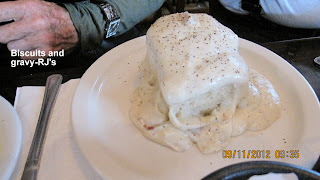 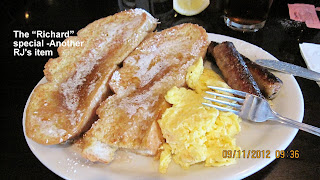