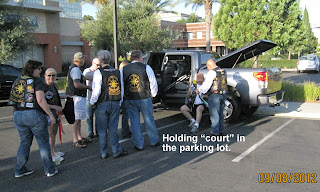 The Saturday Sept 8 monthly ride is called the 5 Lakes Ride but I can only find 4 of them, Lake Arrowhead, Big Bear, Silverwood Lake, and Lake Gregory.  It is possible the 5th lake is called Green Valley Lake, but I am not sure about that.  The ride was planned by our co-Ride Captain Dan, who conjured up a very well thought out trip with no u-turns, great roads, and even a back road or two that I had never been on.  The group 1 Ride leader was Brian on his yellow Gold Wing and you would never know that he is learning the ropes as a Ride Captain. 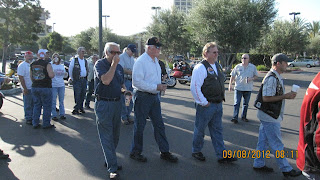 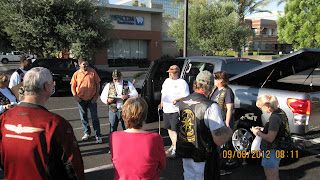 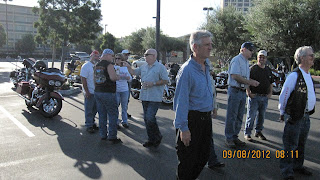 Before we can get to the ride we have our meeting with President Ed normally handling the reins of power and presentation.  Ed and Susan were there holding court but due to Ed’s knee replacement he is still is taking it easy, letting some industrial strength pain killers work their magic by helping him overcome the pain of recovery and healing. Ed does confirm that our Thursday meeting in Costa Mesa was well received.  Meeting duties and reading of notes were ably handled by Vice-President Chuck.  Our raffle and 50/50 drawing ticket sales are now handled by Barb and Rick, two newer members that have become very involved with the group as valued additions to the roster.  I missed the drawing for the 50/50 pot but somehow Richard Taz Green did not win it again, instead Charlie carted off the loot.  I did not win a prize like Luis and Minita did.  Several attendees to the meeting did not do the ride including Charlie and Carol plus Stan, Richard-Taz and Mark made the meeting as well.  Two guests, Doug and Cindy were going on the ride, I forgot they were still guests and Stan has been their friend for a long time.  Looks like Doug and Cindy are getting close to the three ride threshold to finally become members. There is a 3 ride minimum to join and maybe even a 3 ride maximum if you don’t, not sure about that.  I spoke to Floyd at the end of the ride about cardiac issues and hopefully he will be having some of them checked out.  Staci mentioned and I agreed that it seemed like we have not been on a ride with all of us for a long time, like months, maybe it was just the extra week due to moving the ride back because of Labor Day.


Whenever you mention mountains think of twisting, curvy roads going up down as they wind around contours of the terrain to bring you to your mountain top destination and back down again. This is what lies ahead on today’s adventure past all the lakes.  As often happens with me I am a bit concerned about keeping up with the rider in front on the tight twisting roads and this time that is Patty on her V-Star 950.  With just a couple years on two wheels she does a very credible job of planting that motorcycle right where it is supposed to be and all I need to do is maintaining proper spacing.  The pace set by Brian seems about perfect and everyone has a great ride.  Well mostly, turns out Doug on his 2008 Gold Wing discovers a leaking shock absorber making it somewhat difficult to cope with big bumps and slowing him down in spots. 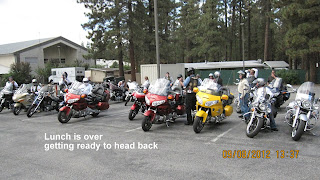 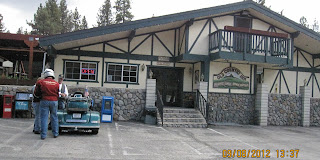 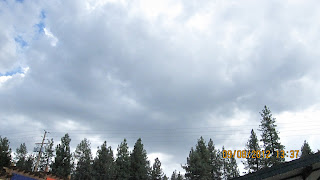 We arrive at Big Bear and head for the Old Country Inn, a previous stop on a past ride.  Lunch goes well and I look up through the overhead and see some dark clouds moving in.  During lunch I was trying to help Glenn with his phone and e-mail, but looks like another case of forgotten password.  Evan Brown has a birthday coming up and I think he was hiding during the video as he did not want Chipotle to know he ate someplace else.  We could do an entire blog just on his visits to Chipotle, I have been there once.

Since the return route will be on Highway 38, the back way in or out of Big Bear, we climb to over 8,400 ft. level and I expect we could get a bit wet in the process.  Turns out the clouds are further west and we crest the top with blue sky above.  As we proceed down the hill towards the flat lands of Mentone and Redlands we catch up to the rain clouds and ride on some shiny wet and curvy roads and are hit with light to moderate sprinkles, wetting us down but not really soaking us.  I’m looking at the road through the sprinkles and shiny and wet are not exactly appropriate terms while on two wheels, I can think of better places to put those descriptions.  Our gas stop in Mentone allows me to wet the Kool Vest so that I can keep cooler in the 102 degree ride home. 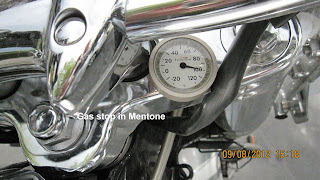 All in all a very successful day riding with some of the best people around, on some challenging but fun roads, making it a very therapeutic adventure.  One more thing, we have to help Larry find a left side saddlebag for his Blue and Black Royal Star Venture as he lost the lid a while ago and can’t find a replacement.  This could be a great Craigslist challenge.