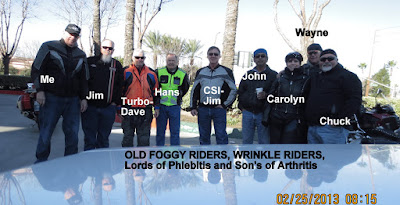 
View Larger Map
The group is called Old Foggie Riders by the leader and one of its original founders Turbo-Dave.  Dave rides an FJR sport-touring model but has an 11 gallon combined gas capacity including the stock 6 gallon tank and an added 5 gallon tank and rack on the back end; he just never needs to stop.  With Dave is Hans another of the original OFR guys.  Showing up today is also CSI-Jim with a Road Star from Southern Cruisers and another Jim on a Harley also from SCRC, another new addition is John on his Royal Star Venture.  I have ridden with this bunch on more than one occasion and always enjoyable.
The ride starts early at the 57 and Imperial Ave. parking lot by Lucile’s in Brea where I meet Chuck, Carolyn and Wayne at about 6:45 AM.  I was not sure Wayne was going to make it but sure enough he shows up. Both Carolyn and I have ridden with Dave and Hans but Wayne and Chuck have not.  We head out towards the I-15 and 4th St. in Ontario where we will meet the rest of the crew.  We arrive rather early and it is cold, time to put on a fleece jacket under the Tourmaster, soon the others arrive, we get a group photo and off we go.  One thing is certain, between Turbo-Dave and Hans they know just about every road that you might want to take a motorcycle on in any given direction in all of Southern California. 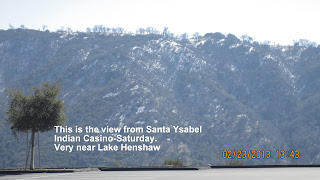 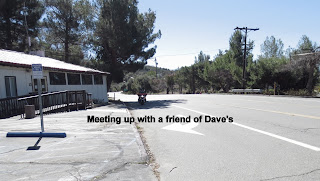 As we head for our eventual lunch stop at Lake Henshaw on Hwy 76 near Mt. Palomar we start down some very interesting and challenging roads including Sage and Wilson Valley, both new roads for me, Chuck, Carolyn and Wayne and maybe a couple others as well, rolling, twisty and plenty of curves but fun to be on.  This takes us to the famous Aguanga stop on Hwy 79 where we turn left towards Warner Springs and Lake Henshaw. 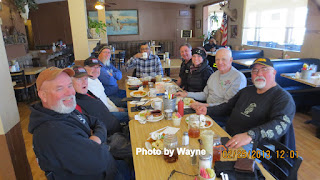 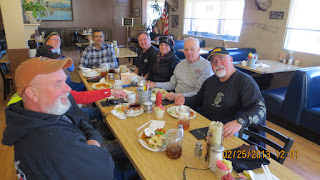 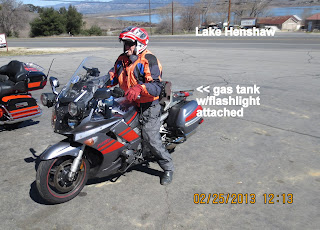 Arriving at the vast inland sea of Lake Henshaw which stretches for many feet in several directions, we stop for lunch and all is good.  At least there is still water out there, but in the not too distant future it will probably wind up a dry lake bed.
After a good lunch, and an energetic ride up I-15 to the 91 I arrive home around 2:30 PM or so.  Great ride, wonderful company and all ends safely.
Posted by Richard at 7:05 PM