Several weeks ago the idea popped in my head about playing the banjo, maybe after watching some 9 yr. old kid play it like it was simple and easy.  Whatever the reason the flames of banjo frenzy were fanned when Sheila Rae, a motorcycle rider who took up the banjo on her own, posted a photo on Facebook holding a banjo of all things.  We traded one message after another about how to learn and what is involved on a banjo and then at my birthday party she brought some finger picks for me.  Now that I had the picks why not get a real banjo so I started looking.


Hunting for things on E-Bay and Craigslist are big time hobbies, so with YouTube help it did not take too long to figure out which make of banjo would be best for a beginner and it turned out to be by a company in San Diego called Deering and especially the Good Time II model as a good bet to start on.  Scanning the offerings and after a few days there it was on e-Bay a Deering  Good Time II model brand new for sale with no reserve at around $300 so I bid, got outbid, and then posted a max amount of $425 which put me in the lead.  This model sells on-line for $550 so it could be a good deal.  After posting the bid, went on Craigslist just to see if anything new had been posted and to my major surprise was a new listing for a Deering Good Time Classic II model for sale by private party and asking $500 including a hard case and Deering strap. Oh my gosh, this is an upgraded version, lists for $990 and priced on Amazon at $750 plus about $100 for the hard case.  Only problem to deal with now is the auction on e-Bay where I am top bidder and can’t cancel. I had to wait until the very last minute of the auction to see if I might be sniped out of the top spot by another buyer and sure enough within the last 50 seconds I was out bid by two guys who were trying for it and the price hit $440 within the last few seconds ending my connection with E-Bay.


I was now free to contact the seller of the Craigslist ad and see what he had.  Turns out it is as advertised in virtually new condition, with a very nice hard case, strap and some picks, all I need is an electronic tuner and some talent and I’m good to go.  At least that is how it was on day one after buying it for $475.  Once I tried to actually tune it and play a chord it suddenly became a reality, I have no idea how to play the darn thing.   Using YouTube video plus buying an electronic tuner I am able to tune and adjust it to what sounds like the proper tuning.   Sadly you can't buy talent so I am out of luck there.  After I meet with a teacher scheduled for Monday it should start me on the path of practicing and learning what I need in order to eventually play something.  Could this mean less time for the blog or even motorcycling?  It might take some time away from the blog and writing but hopefully the motorcycle will not be neglected.

Will keep you posted as, or if, I make any progress in learning how to actually play it in a meaningful way.
Posted by Richard at 8:45 PM No comments:

Anza Borrego the ride of perfection 3-2-13 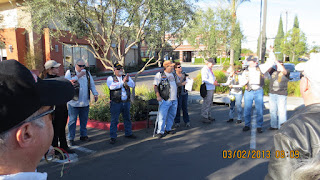 The ride home once we got on the I-5 at Oceanside was going so smoothly and relaxing with Scott leading that I started to compose the write-up for this report with words like working like a Swiss watch- with all the gears meshing correctly and all the little cogs in the exact right place just ticking along, a well oiled machine.  That is how it was supposed to be, but let’s go back to the beginning and see how well we did.


Arriving at Denny’s at 7 AM in anticipation for the Saturday ride to the Anza Borrego desert area a 300 mile ride, I met up with my very good friend Johney and ordered breakfast.It took a long time just to get the French Toast Senior Slam and when I did the eggs were slightly runny, a bit disappointing for Denny's. 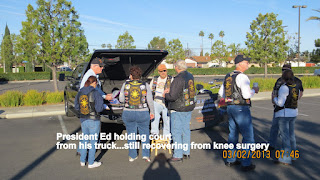 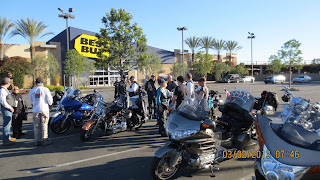 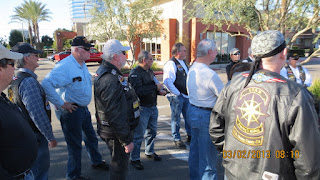 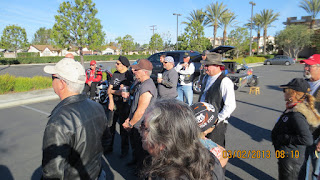 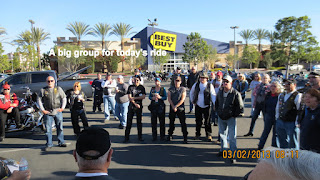 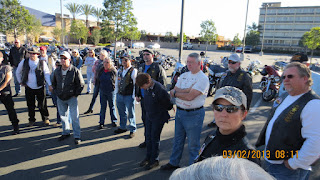 We arrived to a growing group of riders including Joe Magdaleno, Frank Alvarez, Jim Holland, Diane Holland, Peter Rock Casey, Alfredo Lara, and Larry Yang from the L.A. Harbor area, making the total close to 40 riders and passengers before we left.  A new guest shows up and it’s a lady rider, Sheila on a Honda. Larry asked me to be her Shepherd for the ride which was fine but since I was not officially designated as such someone else took over. In case you are not familiar, a Shepherd in this case is an experienced rider that will help a first timer with us learn the ropes of our type of group riding, even though they may be a very seasoned and accomplished motorcyclist. It is one aspect that sets us apart from many other motorcycle groups that have little concern about rider safety.  All the birthday people for March get serenaded and I was one of those in the middle.  When I told Luis how old I will be his eyes got rather large as if he was a bit surprised.  At the wrap up meeting the L.A. riders were all voted in as members of our chapter.


Off we go towards Temecula then past the now closed Warner Springs to Montezuma Road dropping down a good winding grade to the town of Borrego Springs.  We have stayed at Warner Spring’s years ago and it was a nice get away place with two large natural hot springs fed swimming pools, a restaurant, horse riding and a big golf course.  One pool was hotter than the other but both got the water from underground springs, even played at golf there with a couple of Financial Planner friends that owned an interest in the place.  I don’t know what happened but it appears completely closed.


I was wearing my mesh jacket with a liner and at our first gas stop in Temecula thought I might take the liner out as it was warming up nicely, but as a seasoned veteran of elevation changes realized we would be over 4,000 foot level at Warner Springs and beyond so left it in and as luck would have it glad I did.  At the next gas stop in Borrego Springs, again weighed the conditions and figured even though it was also warm here, we will be going back up the steep and very winding Banner Grade to Julian also at 4,000 foot level, so kept the liner in and again was happy with that decision…I am getting good at this.   I thought, watch what the old guy (me) does, he has learned by now. 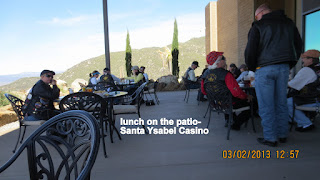 Lunch at the Santa Ysabel Casino was very well done regarding service and selection and again I got complimented by Ed for bringing this lunch location to the group's attention. 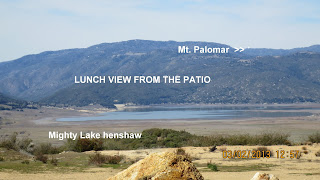 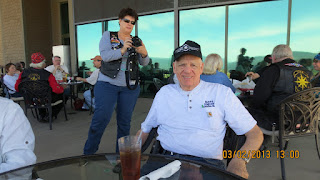 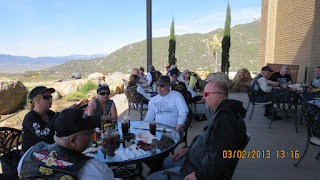 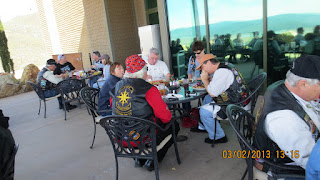 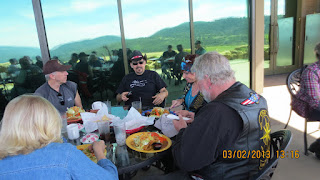 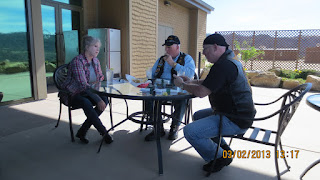 We were seated out on the patio overlooking Lake Henshaw or is it a pond, and Mt. Palomar way off on the distant mountain top. Leaving the casino I put a whole dollar in a slot machine and in one pull was able to contribute that money directly to the Indian Reservation Retirement fund.


Our last gas stop is just before we connect with I-5 at Oceanside and turn towards Ball Road and the 57 Freeway for our ride wrap up meeting at the El Torito restaurant. It is at this stop I finally take out the jacket liner as it should be fairly warm the rest of the way-I am an All The Gear, All of The Time type person. Then we hit a huge traffic snarl as we pass the Ortega Highway where it really slows to a crawl.  Luckily Scott had moved us into the car-pool lane but until we finally passed the overturned truck and a car smashed into the center divider wall, it cost us a lot of time. 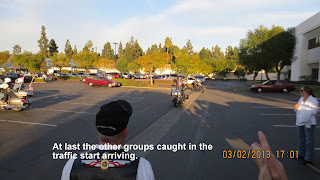 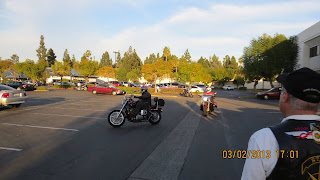 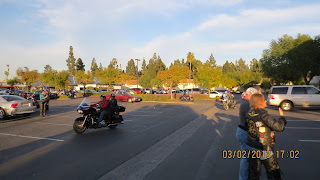 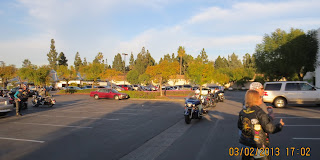 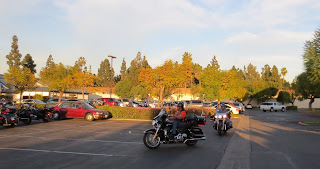 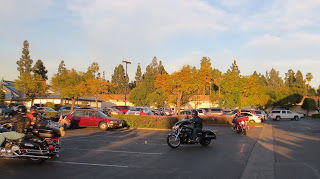 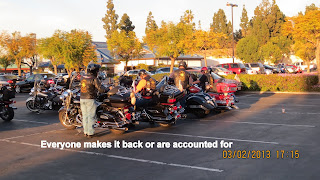 It was at the wrap-up meeting where I learned maybe it was not quite as smooth as I thought.  First I learned one rider left the group at lunch due to fatigue since he had not been riding much this past year due to an accident, next we left one rider at the last gas stop but he joined group two immediately behind us. Then while in the traffic tie-up one rider had to pull out due to a clutch failure or shifting problem with tail Gunner Mike peeling out after him as part of our safety credo that no one is just left to fend for themselves in an emergency.  Mike arrives at the meeting to let us know the rider was safely on his way to the Harley dealer after some roadside repair.  As we pass the 57 Freeway turnoff one more rider & passenger drop off and head for home with shoulder pain.   For me and most everyone however, the ride still went like clockwork and the final touch was a delicious cookie brought by Cindy from her fabulous home cookie kitchen.  Oh yes, President Ed went out of his way to make sure Larry the lead Shepherd put me in line for certification as a Shepherd, acknowledging that I am getting good enough as a rider to be in the ride crew.
Posted by Richard at 12:11 PM No comments: